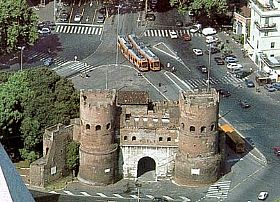 On the southern side of the city sits Rome's most picturesque portal. The Porta San Paolo is an ancient gateway in the Aurelian wall, which was constructed by the Emporer Aurelius in the 3rd century to defend against the Barbarians. The defensive and decorative structure was built next to the unusual Pyramid of Caius Cestius. The original simple gate was amplified and fortified by Maxentius in the 4th century. It bears two semi-cylindrial towers and a double gateway, all topped with crenellations. It looks like a castle, earning it the nickname, "castelletto". Two low doors from the towers lead to a walkway atop the wall.

Originally named Porta Ostiensis, it was the portal on the ancient Via Ostiense, which led from the heart of Rome to the seaport of Ostia. The ruins of Ostia Antica are definitely worth a visit. The gateway was later renamed Porta San Paolo in honor of the nearby basilica, where the Apostle Paul was beheaded for his faith and evangelism.

The Porta San Paolo was the scene of a fierce and decisive battle during WWII, and was the portal by which the Germans seized Rome. The Porta now stands isolated in the middle of a heavily trafficked avenue, but the gate itself is pedestrianized and can be walked through calmly.

The Ostiense Museum is housed in the gatehouse.

Haven't visited yet? Have questions about Porta San Paolo? Ask them here!