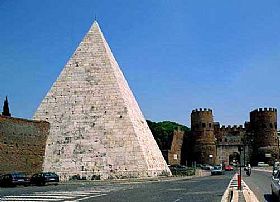 On the edge of Rome's historic center is an ancient monument that seems strangely out of place. An Egyptian-style pyramid stands in the midst of Roman ruins, an architectural folly built in 12 BC. A Roman senator named Caius Cestius wanted to distinguish himself in death and commissioned the 36-meter high pyramid to be constructed as his eternal resting place. The unusual structure was erected in just 330 days, thanks to the efficiency of Roman building techniques that used brick for the frame, then masked it in marble.

Located in Piazzale Ostiense, the pyramid was a fanciful fit of fashion when Rome was abuzz with Egyptian-themed motifs, thanks to the Roman defeat of Egypt and the fame of Cleopatra. It's located near Porta San Paolo, one of the gates of the Aurelian Walls, which were constructed in the third century as part of the defensive structure of Rome; the walls were built abutting the tomb of Cestius.

The monument bears tribute to an ancient fad and makes immortal a man who apparently had no other distinctions but a penchant for pyramids.

Haven't visited yet? Have questions about Pyramid in Rome? Ask them here!