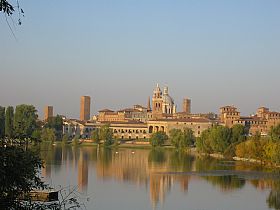 Mantova is a lovely art city, lively cultural spot and musical center for northern Italy. It is surrounded on three sides by lakes formed by a tributary of the Po River, the Mincio. The fan-shaped city is in Lombardy, not far from the borders of Veneto and Emilia-Romagna, making it a central point and regional cultural hub. It is a striking city of noble buildings and pretty piazzas.

Mantova was originally settled by the Etruscans, before passing to the Gallic, but it was under the Romans that it flourished. The Roman writer Virgil was born nearby in 70 BC and his hometown has been renamed Virgilio in his honor. It was under the Gonzaga family's control for three centuries, and the city was the setting for Verdi's opera, Rigoletto.

The Palazzo Ducale was the Gonzaga family residence, a 500-room complex of buildings that included a castle, a basilica, courtyards and gardens. Palazzo Te is a Renaissance style palace built by the Duke of Mantova, Federico II Gonzaga. It now houses the Museo Civico which highlights the history of Mantova. Originally built as a hunting lodge, it has a beautifully frescoed room called the Sala dei Giganti.

The Duomo bears an 18th century facade while housing beautiful stuccoes from the 1500s by Giulio Romano. The round brick chapel known as the Rotonda di San Lorenzo was originally built in 1083. The Basilica di Sant'Andrea was designed by the Renaissance architect Alberti but includes a Baroque cupola. The gorgeous and opulent Teatro Bibiena is in the Palazzo dell'Accademia, endowed by the Gonzaga family as a lasting musical monument to the city.

The elegant Piazza Sordello is the city's drawing room, hemmed in by churches and palaces, with sidewalk cafes, Renaissance arcades, and a lived-in atmosphere. The Piazza dell'Erbe is more austere but is in the heart of the shopping center of town. It has the Palazzo della Ragione with its 15th century astronomical clock tower. The overall feel of the city is elegant, with its beautiful buildings outlined in arcades that exude the pride and history of Mantova. There are loads of restaurants, boutiques and shops to enjoy among the architectural and art gems.

Mantova is just south of Lake Garda. It sits about half-way between Verona and Modena, in the heart of the northern cultural circle.

Haven't visited yet? Have questions about Mantova? Ask them here!

Rent a holiday home in Lombardy and travel like a local. 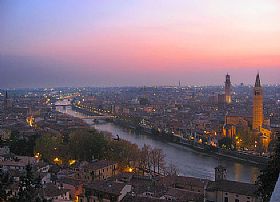 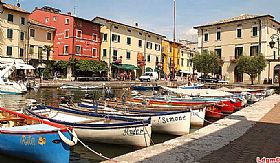