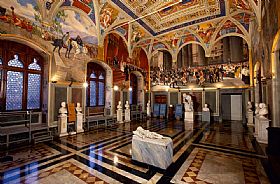 A must-see museum when in Siena, located in the city's landmark Palazzo Pubblico on the characteristic Piazza del Campo. It is Siena's most famous piazza and most important civic building with its distinctive tall and slender bell tower that contains grand salons once used for governing the powerful city-state, the rooms swathed in a colorful riot of monumental frescoes that depict epic scenes and grand allegorical dramas.

The city's history through the centuries is recounted in fresco form along with allegories attesting to Siena's power and some religious scenes, too. The most famous works are the Virtues of Gods and Men, the Stories of the Madonna, and, the most renowned, the Allegory of Good and Bad Government. Ambrogio Lorenzetti was commissioned in 1337 to paint it, and when it was completed was the largest secular painting cycle of the Middle Ages. The museum has sculptures and other paintings as well.

Don't miss the Civic Museum for its grandeur, but also for the chance to climb up the palace's loggia and enjoy breathtaking views of the city and the surrounding Tuscan countryside, too.

Haven't visited yet? Have questions about Museo Civico? Ask them here!

Have a look at our vacation villas in Siena.