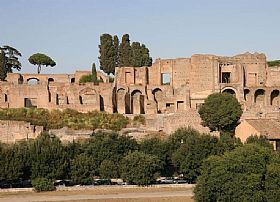 The Palatine is one of the seven hills of Rome and, according to legend, the place where Romulus founded the city. It looked like a big squared relief with an area of seventeen acres and two peaks, Palatium and Cermalus separated by a saddle.

From excavations proved that it was inhabited since the Bronze Age (1250-1200 BC) is therefore one of the oldest areas, which gradually merged with the other inhabitants of the nearby hills giving birth, in the late eighth century BC, to a real fortified city sort including the limits of which were later built the Arch of Titus on one side and the House of the Vestal Virgins on the other.

The hill was for three centuries the managerial and political center of the ancient city and was the seat of the Imperial Palaces of which are preserved remains of that of Augustus, Tiberius and Domitian. Subsequently, however, it was not abandoned as he continued to be as the imperial residence.

In medieval times the site was abandoned and got cultivated with orchards and vineyards as the near Campidoglio Hill. In the Renaissance it became a property of the Farnese family, and there arose the Horti Farnesiani still partly preserved, then passed to the Bourbons of Parma and Naples. In the first half of 1800 it still appeared covered with vineyards, orchards, trees, mills powered by the swamp of the Circus Maximus and above the ruins of the Palatine Antiquarium it arose the neo-Gothic Villa Mills. In front you could see the Aventine Hill with gardens, monasteries and the Jewish Cemetery and east of the Celio Hill and the Baths of Caracalla.

In 1870 the Italian State purchased the entire hill starting the excavations that have erased much of the Renaissance gardens, but to brought back to life the various historical layers of which it is composed. Currently the site has been transformed into a vast museum.

Haven't visited yet? Have questions about Colle Palatino? Ask them here!