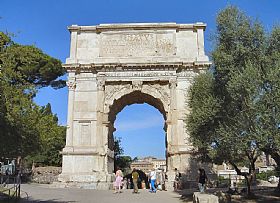 Standing grandly at the highest point of Via Sacra, the Arch of Titus is right outside the Roman Forum. The oldest of the triumphal arches that heralded the victories of the ancient empire, this one has deeply carved reliefs with amazing detail. Two thousand years after it was constructed, it tells the tale of Roman history that became epic. What might have been just another battle was actually the fulfillment of a prophecy.

The Roman Empire had expanded and occupied Judea. A revolt in 66 AD against the Roman occupiers brought quick action by Emperor Vespian, who dispatched his son Titus with the best troops to quelch the zealots' revolution. Titus captured Jerusalem in 70 AD and, with the fall of Masada in 72 AD, completely crushed the revolt. In 79 AD Titus was made emperor, but he died two years later. His brother and successor, Domitian, dedicated this arch in 85AD in posthumous honor of Titus's grand victory in Judea. The relief carvings show the Roman troops in procession, carrying off the spoils of their victory, the precious relics from the temple, all clearly identifiable in the detailed carvings inside the arch. There is also a depiction of Titus in his chariot accompanied by winged Victory, who places a laurel wreath on his head, the procession being led by Dea Roma, the goddess of the people of Rome. Another relief depicts Titus ascending to deity on the wings of an eagle.

The destruction of Herod's temple and the city walls of Jersusalem fulfilled a Biblical prophecy: "Do you see these things? Truly I tell you, not one stone will be left upon another that shall not be thrown down," Jesus told his disciples. It was fully realized when the Romans destroyed the temple and broke apart the fallen pieces to extract the gold that had once gilded the walls, which had melted during the fires of destruction and oozed between the fallen blocks. The prophecy of Jesus from some 40 years prior was fulfilled, and the Arch of Titus further documents the evidence of this epic event in history.

Haven't visited yet? Have questions about Arch of Titus? Ask them here!