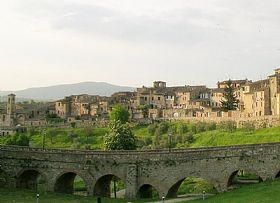 The medieval town of Colle di Val d'Elsa is set like a jewel on top of a high and evocative hillock, whose narrow valleys divide into three parts the fabric of the town. The name Colle di Val d'Elsa indeed means hill above the valley of the Elsa river. These three parts were anciently called Piano, Borgo and Castello, but in recent times simply Colle bassa and Colle alta (respectively low and high Colle).

Colle di Val d'Elsa - not far from the fascinating Monteriggioni, Casole d'Elsa, San Gimignano, Poggibonsi - is commonly known for the flourishing glass industry, born at the end of the sixteenth century and progenitress of crystal. The village has been chosen indeed to house the Museum of Crystal, with unimaginable compositions to witness the history of this charming art.

Colle offers innumerable tourist suggestions (including the gastronomic ones with a pair of valuable "tables") like the notable Museum of Civic and Holy Art, housed into the Palace of Priori - which is an authentic work of art itself – and the historical Museum Ranuccio Bianchi Bandinelli. The latter displays unique finds of the Terrosi's collection, like the rare "kelebai" (Etruscan cinerary urns, datable from the end of the sixth to the beginning of the third century before Christ) from Volterra.

You cannot go away without having a look at the Dome and paying tribute to the Tower House at the end of Via del Castello where,according to the legend, was born Arnolfo di Cambio (renowned Italian architect and sculptor) in 1240.

The ex Conservatory of St Peter is a doubtless treasure of art and architecture, designed by Giorgio Vasari the Younger and used to home any temporary museums in town. But the architectural beauties of Colle are not over... from Palazzo Campana, that closes the top of "Castello", to the Theatre of Varii, from the Convent of St Francis to Via delle Volte: a memorable walk, 100 metres long, that shows a medieval photograph of the Castle.

Birthplace of Cennino d'Andrea Cennini (sublime Italian painter influenced by Giotto, lived between the XIV and XV century), Colle di Val d'Elsa offers many of his oeuvres. A magic place where art and history merge together into a fascinating life style that also means high-quality hospitality and refined occasion to go shopping! :-)

Haven't visited yet? Have questions about Colle di Val d'Elsa? Ask them here!

Enjoy the comfort of a home rental in Colle di Val d'Elsa. 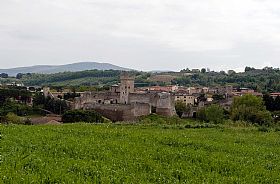 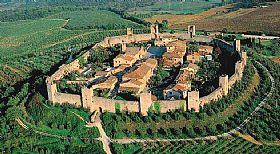