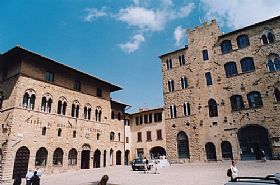 Magic and mysterious, the city of Volterra will surely enchant you at first sight. Located at 1,770 feet above the sea leve between the rivers Era and Cecina, it is still surrounded by solid stone walls. This beauty has over 3000 years of history to tell about.

The relevant isolation has actually limited the industrial and commercial development of the city, that's why Volterra has preserved a fabulous intact medieval look.

It was great Etruscan lucumon and important Roman province (I-V centuries BC), as proofed by the Augustan theatre of Vallebona.

From the Etruscan period the city has kept some significant signs, like the town walls, the imposing Porta all'Arco, the huge necropolis of Marmini and the numerous archaeological findings (ancient alabaster cinerary urns, finely manufactured jewels) preserved in the Etruscan Museum Guarnacci.

In the Middle Ages, the town expanded itself all around the old church of St Maria (the current cathedral) and the adjoining pratus episcopatus, today called Piazza dei Priori, which is the historical centre of the town and, nonetheless, one of the most stenographic Italian piazzas.

Palazzo dei Priori was built in the XIII century, and this makes it the oldest town hall in Tuscany. Enriched by elegant windows and a notable façade with numerous marble and glazed terracotta coats of arms. In Piazza dei Priori, you will find many other artistically interesting ancient buildings, such as:

Palazzo Vescovile: originally built as a grain store, the Palazzo became residence of the bishop after 1472, when his house was destroyed at the hand of Florentine soldiers, in order to conquer the fortress.

Palazzo Incontri: built in 1500 by Attilio Incontri, noble minister of the grand duchy of Tuscany. The drawing on the façade's been attributed to Bartolomeo Ammannati. Benedetto Giuseppe Viti, tripper and dealer, in 1550, bought the building that was almost radically restored; while other restoration works were made in occasion of the visit of the king Vittorio Emanuele II, in 1861. The Palazzo's also been setting of the famous dramatic film Vaghe Stelle dell'Orsa, masterfully directed by Luchino Visconti in 1964.

Palazzo Pretorio and the tower of the Piglet: this construction's been made up of several earlier buildings and modified in the XIX century. It originally was seat of the podestà. The Palazzo is surmounted by the battlemented tower called Torre del Podestà, but popularly known as Torre del Porcellino, because of the piglet's statue on top of it.

The Baptistery: octagonal building dating back to1283, with a lovely Romanesque portal. Inside it: the baptismal font by Sansovino and the decorated altar by Mino di Pietro.

Volterra, anyway, is famous to be the city of alabaster. The city numbers indeed many professional artisans, from whose hands take shape a huge range of things, made using this translucent malleable mineral. Pride of the city, rich in ore deposits of this variously coloured mineral. They make appreciable pots, goblets and ornaments.

Haven't visited yet? Have questions about Volterra? Ask them here!

Have a look at our vacation villas in Volterra. 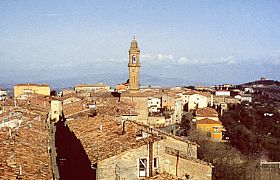 Pomarance was one of the most important medieval castles of Volterra, and its name was given to a noted Renaissance artist.

Set in the Valdera near Lajatico and Volterra, Cedri has been a rural Tuscan village since the 1100s. 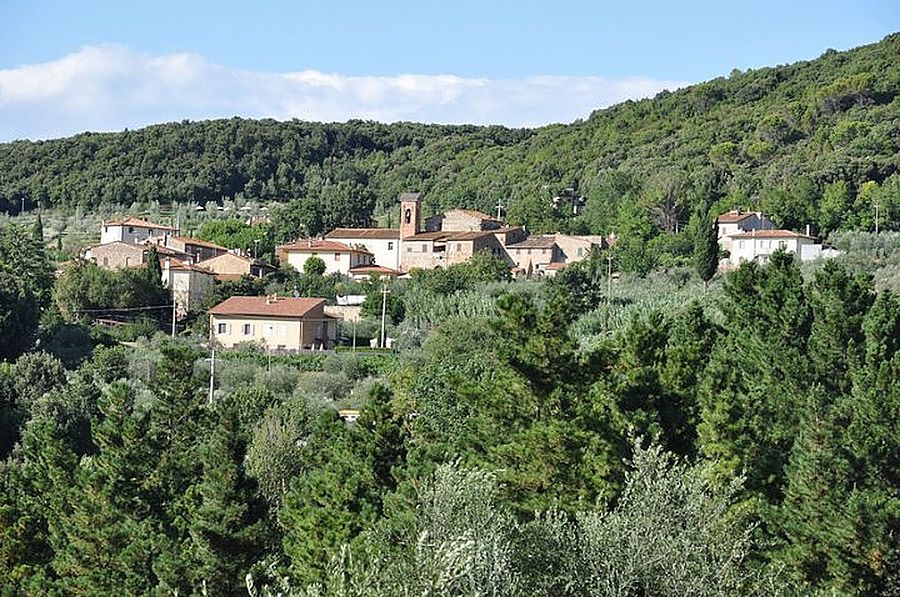