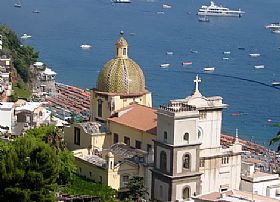 The Church of St Maria Assunta in Positano used to be a great example of Medieval art, whose history was deeply bound with the Benedictine monastery of St Maria. According to the legend the monastery was erected in honour of a Byzantine icon representing the Virgin Mary, which is still venerated by the locals.

The abbey had a certain prestige until the first half of the XV century, when the last Benedictine abbot Antonio Acciappaccia di Sorrento and his monks, tired of being robbed by violent plunderers coming from the Cilento coast, left the monastery.

Very probably the Benedictine monks, who run on board of their ships across commercial and fishing routes all along the south of Italy, carried the Byzantine icon in Positano during the XII century. A small parchment, preserved into the church archive, reports that Giovanni II Bishop of Amalfi in 1159, dedicated the church to the Blessed Virgin Mary.

The legend says instead, that a prodigious phenomenon brought the icon to Positano. It was part of a sailing ship coming from the East that, landed in Positano, got into a dead calm and stopped there. After numerous attempts to go on, at some point the sailors heard a voice saying: "rest, rest". The captain interpreted that prodigy as the want of the Virgin to stay there and decided to land. At that point the ship started moving again. Once landed the sailors gave the icon to the locals, who erected a temple in honour of the Virgin and elected her Patron of the village.

The current look of the church dates back to the last restoration works, finished in 1783. St Maria Assunta has a nave and two side aisles, five side arches and chapels. Walking from the entrance to the high altar, follow one another the chapels of St Biagio, Immacolata, St Antonio and St Anna. On the right end you will admire the Circumcision altar with a beautiful painting made by Fabrizio Santafede, in 1599. On the right side of the high altar you will find the Chapel of St Stefano, that preserves the eighteenth-century ligneous statue representing the Virgin with the Infant Jesus.

The Byzantine icon, recently restored, stands just above the altar. Beside the apse you will see the solid walnut chorus, whose ends preserve the ‘Addolorata’ on the right and a precious ‘Cristo alla Colonna’, oeuvre by Michele Trillocco (1798) on the left.

Close by the transept there is the Altar dedicated to Madonna del Carmine, with a marvellous painting coming from the Charterhouse of Serra St Bruno in Calabria. Walking on to the exit, along the left aisle, take a few minutes to be enchanted by the chapels of Crocefisso, Annunziata, San Vito and St Nicola di Bari.

The chancel with a majestic organ is located just above the central portal. Rightwards, a small room homes a lovely christening font. The arch between the right aisle and transept shows a stunning bas-relief (maybe an old St Vito’s reliquary) dated back to 1506. In front of it there is a grave stone to commemorate Pirro Giovanni Campanile, Neapolitan priest elected commendatory abbot. The stone is surmounted by a notable bas-relief representing the abbot’s coat of arms. A few steps far from the church courtyard rises the splendid bell-tower (1707), built at the hand of a Capuchin friar, who was commemorated in a grave stone fragment, located onto the external wall of the church along Via Vito Savino.

Above the bell-tower door, there is a walled bas-relief dating back to the Middle Ages, and just above the bas-relief you will notice a grave stone placed there in 1902, in order to commemorate Flavio Gioia, the man who invented the compass.

Haven't visited yet? Have questions about Church of Santa Maria Assunta in Positano? Ask them here!

Ask our staff about self-catering homes in Positano.