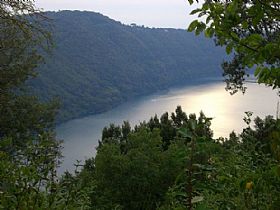 This unique regional park encompasses millennia of history with protected natural resources in the splendid hills south of Rome. The Castelli Romani has been an exclusive getaway for dignitaries since the Roman times, first for the emperors and then for popes. Here, you'll find Roman villas, Renaissance palaces, Medieval castles, and religious monasteries all over the region.

In the midst of these towns and historic remains is the Castelli Romani Regional Park that preserves the natural landscape and habitat of many animals and plants. It encompasses 12000 hectares (more than 29,000 acres) of pastures, woods, and lakes. There is a plethora of hiking trails, along with picnic areas to enjoy. A variety of animals in the park include badgers, porcupines, fox, woodpeckers, peregrine falcons, and hawks. The park includes ancient volcanic calderas that are now lakes, beech forests, native Mediterranean shrubbery, and rolling hills, along with the lofty heights of Monti delle Faete.

The visitors center is located in Rocca di Papa. There are fifteen towns within the borders of the park with 300,000 residents, many of them well-preserved and charming medieval centers, like Lanuvio with its walls and ancient watch tower, and Ariccia, an artistic gem with architectures built by Bernini. Lake Albano and Lake Nemi are fresh-water respites, and the Vatican Observatory is located in Castel Gandolfo, also home to the papal palace and some incredible villas. Frascati is the heart of Lazio's wine country where the region's celebrated DOC wine comes from.

There's plenty to eat in the area, too - it's known for its porchetta (whole roasted pig), strawberries, and kiwi fruit, along with wine from Frascati and Lanuvio, and olive oil.

Haven't visited yet? Have questions about Castelli Romani Regional Park? Ask them here!