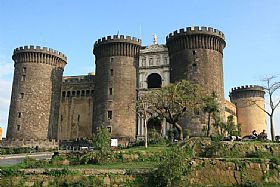 It's hard to miss the hulking castle that dominates Naples' seaport, the Castel Nuovo. The so-called "new castle" was commissioned in 1279 when Charles I of Anjou, rulee of the Kingdom of the Two Sicilies moved the capital from Sicily to Naples. He brought in French architects to design the structure that would serve both as a fortress and a royal residence. The imposing towers, heavy bulwarks and crenellated battlements make the Castel Nuovo one of the architectural symbols of the city.

The castle housed the court hosted visiting royalty and cultural dignitaries, such as Boccaccio, Petrarch and Giotto, who frescoed the hall and the chapel, though only a few fragments of his work remain. It has been enlarged and adorned through the centuries, with a triumphal arch added in sculptural Renaissance splendor, a white marble contrast to the heavy cylindrical towers. There was a moat for protection, and legend holds that one of the kings kept a crocodile in it. The chapel is charming, and the grand Sala Grande, also known as the Sala dei Baroni, boasts a spectacular 92-meter high vaulted ceiling (300 feet).

The seafront fortress has lovely views from the upper stories, and a massive internal courtyard. It is now home to the Museo Civico, a museum that occupies two floors, and government offices. It is located at the port, near the Piazza del Plebiscito.

Haven't visited yet? Have questions about Castel Nuovo? Ask them here!