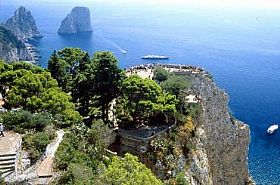 The Giardini di Augusto, also known as Parco Augusto, are a 15-minute walk from La Piazzetta and allow you to enjoy one of the most extolled panoramas of the Faraglioni and and Marina Piccola.

The gardens consist in a series of green terraces, built in the 1930's on the ruins of an imperial Roman villa.  Besides the beauty of the garden themselves, the place greatest attraction is, you guessed it, the dizzying view from the terraces that jut out from the cliff and hang over the cobalt green sea and the Faraglioni.

Over the flyover there's the notorious Via Krupp, a steep dizzy descent to the sea, characterized by the narrow torrents, so called after the German magnate of steel, in love with the island, who strongly wanted it built in the XIX century.

Haven't visited yet? Have questions about Giardini di Augusto? Ask them here!

Enjoy the comfort of a vacation home in Capri.