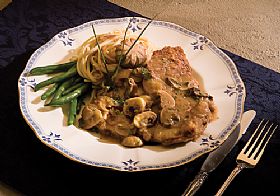 The origins of the dish are unclear, but the use of Marsala, a Sicilian fortified white wine, points to the island. However, it’s commonly found on menus in Roman trattorias, leading some to believe it developed and became popular in the capital city. Either way, it’s delicious and impresses your friends at the dinner table.

Don’t be tempted to substitute the Marsala wine for any normal white wine; the taste will be completely different (and it won’t, by definition, be Veal Marsala!)

Dredge the meat scallops in flour, shake off the excess, then sprinkle them with salt and pepper.

Heat olive oil in a large skillet and brown the veal scallops on both sides. Remove from the pan to a plate.

In the skillet, add the garlic and mushrooms. Saute a few minutes until the mushrooms are tender and cooked. Put the veal pieces back into the pan along with the juices and heat through.

Add the Marsala wine and simmer a few more minutes, until the sauce starts to thicken.

Put the veal and some mushrooms on serving plates. Turn the heat up to cook the sauce to the right consistency and drizzle over the meat. Sprinkle with chopped fresh parsley, if desired.

Haven't visited yet? Have questions about Veal Marsala? Ask them here!