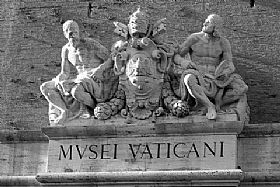 One of the world's largest and most important museums is located in the world's smallest state. The Vatican Museums is a vast complex that covers nearly nine miles of ground and is actually a series of museums placed inside the splendid papal palaces, inside the walls of the Vatican. It houses priceless antiquities and exquisite works of art.

There is the Etruscan Gallery, the Egyptian Museum, the Gallery of Tapestries, the Ethnological Museum, and the Gallery of Maps, a long corridor frescoed with 40 maps of the Papal States' territories. A Lapidary Gallery, Classical Statue Gallery and Modern Religious Art Gallery are also part of the Vatican Museums. You'll find stamps from around the world and ancient coins, along with incredible prehistoric statuary, Greek and Roman era sculptures and mosaics, and Etruscan treasures from the tomb city of Cerveteri.

But probably the best known part of the Vatican Museum is the Pinacoteca, the Picture Gallery, which showcases some the best-known Renaissance masters and some of the world's most renowned masterpieces. The Raphael Rooms alone are worth the admission price - four rooms of frescoes which took the young artist 16 years to complete, but the result sealed his fame and established his reputation as a true master. His most famous fresco is here, The School of Athens, which depicts Greek philosophers debating truth with a perfectly-proportioned background. Raphael painted the faces of his mentors and contemporaries as the philosophers, including Leonardo da Vinci, Bramante and Michelangelo.

The art gallery also contains a plethora of paintings by other illustrious stars of the art world, from the late Middle Ages through the Baroque period: Giotto, Fra Angelico, Bellini, Pesaro, Da Vinci, Titian, Caravaggio, Botticelli, Michelangelo, Ghirlandaio, Signorelli and Perugino. And even more! There is also the Borgia Apartment with lavish frescoes by Pinturicchio. At the end is the crowning jewel of the Vatican itself, the stupendous Sistine Chapel. The ticket price seems like a bargain when you consider the wealth of displays you find within.

The Vatican Museum is so extensive and vast that you can't possibly see everything in one visit. The museum map outlines some recommended color-coded routes to help you best use your time according to your interests. an estimated 4 million people pass through the museum annually, so it's a good idea to reserve in advance to make sure you get in. In the summer, they sponsor Night Openings accompanied by musical concerts with hours additional hours from 7:00 pm until 11:00 pm (last entrance is at 9:30 pm).

Haven't visited yet? Have questions about Vatican Museums? Ask them here!