The Museum of Rome at Palazzo Braschi 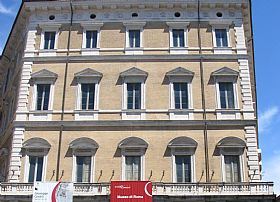 Palazzo Braschi is located in the heart of the Renaissance Rome, between Piazza Navona and Corso Vittorio Emanuele II.

Built with the wealth that the pontiff had poured into the coffers of his nephew, through the attribution of many unscrupulous privileges, Palazzo Braschi is a significant testimony of papal nepotism, renovated for the last time by Pius VI before the radical political and cultural changes induced by the French Revolution.

The building was built over the ruins of the 15th-century building owned by Francesco Orsini, the prefect of Rome. It was lived in the 16th century by Cardinal Oliviero Carafa and then by Cardinal Antonio del Monte Ciocchi who commissioned Antonio da Sangallo the Younger to build a storied tower at the corner between Piazza Navona and Via della Cuccagna. At the end of the 17th century the building came into possession of the Orsini who enriched it with many works of art, then passed to the princes Caracciolo di Santobono that sold it to the family of Braschi Onesti, in 1790.

Palazzo Orsini was demolished in 1791, and the works for the new building designed by Cosimo Morelli began the following year. Interrupted with the French occupation in 1798 (which cost the death in exile of Pius VI), the construction restarted in 1802. the monumental staircase was completed in 1804 and perhaps even the first floor chapel, attributed to Giuseppe Valadier (1762-1839). The economic problems of the Duke Luigi Braschi Onesti did not allow the completion of the building. Sold by his heirs to the Italian State in 1871, the building was used as the Home Office and, later, it housed several fascist institutions. After the war, three hundred displaced families stayed there, until 1949. The frescoes and the floors got severely damaged from the fires that were lit, there were innumerable destructions and thieveries.

Since 1952, it houses the Museum of Rome, but only recently - in 1990 - the ownership of the building passed from the State to the City of Rome.

Being unfit for use, it was closed in 1987. The building has undergone a complex renovation and restoration that have allowed the current partial reopening.

The Museum of Rome holds a wide variety of articles linked in many ways the history of the city, from medieval times to the first half of the twentieth century, evidence of topographic changes and the various aspects of cultural life, social and artistic history of the Capital. It ranges from the production of furniture, carriages and sedan chairs to elements of architectural decoration and urban development, mosaics and frescoes saved from demolition and medieval ceramics, woodcuts for fabrics made in the 18th and 19th centuries to clothing and tapestries of the same era.

There is an important collection of paintings, alongside high quality works, such canvases by Andrea Sacchi, Pierre Subleyras, Pier Leone Ghezzi, Marco Benefial or Pompeo Batoni. It contains paintings of great documentary value, made between the 17th and 18th centuries, to celebrate civil and religious ceremonies and events. The sculptures from the Middle Ages to the 19th century illustrates with monumental works, busts, models and sketches in clay, the activity of some of the most important sculptors working in Rome, like Francesco Mochi, Alessandro Algardi, Melchiorre Caffà, Bernardino Cametti, Pietro Tenerani. The collection of Municipal Prints is really precious. It is composed by drawings and watercolours, prints, engravings and ancient books that testify the graphic art evolution and its techniques from the 16th to the 19th century. The collection of rare old photographs of the Photographic Archives is in continuity with the collection of graphics, providing a complete Roman photographic production between the 19th century and the first half of the 20th.

Haven't visited yet? Have questions about The Museum of Rome at Palazzo Braschi? Ask them here!