The Greek Temples of Paestum 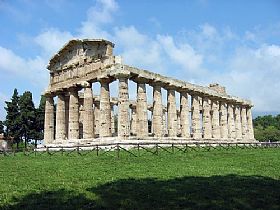 Gleaming in the sun or romantically flood-lit, the incredible temples of Paestum are a must if you're in southern Italy. They are the testimony of an ancient Greek city that once thrived here, many millennia ago. Paestum is a UNESCO World Heritage Site, and the best preserved Greek site in Italy. (Some say these temples are even better preserved than many in Greece itself!)

Despite its location just south of Salerno, near the Amalfi Coast, and not far from Pompeii, Paestum remains off the radar for many travelers, which is a shame because it is a beautiful sight.

So why is Paestum so incredibly well preserved? In the "truth is stranger than fiction" category, the entire site was forgotten about and only rediscovered only in 1740. Only about 20% of the ancient town has been excavated so far. Among the many remains, the Temple of Hera (also called "of Poseidon"), is one of the most famous worship sites in antiquity. The Temple of Hera is the oldest, best preserved and most beautiful Doric temple in existence today.

Paestum has always been a bit shrouded in mystery, though. It was probably founded around 650 BC by a group of Greeks who named their new colony Poseidonia, after the most important of their gods (known in the Roman realm as Nettuno, or Neptune, god of the sea). Poseidonia flourished, as is evident by the city walls, the massive temples, and the city's overall plan. While Magna Grecia began to grow and develop trade routes, the colonists came into conflict with the native Samnite and Lucani tribes. It seems from archeological evidence found here, though, that they reached a point of peaceful co-existence with the Lucanians.

That changed n 273 BC when the Romans arrived. They changed the city's name to Paestum, but we know as little about Roman Paestum as we do about its Greek predecessor. Luckily, the Romans didn't raze the town; in fact, their admiration for these beautifully built temples contributed to the development of classical architecture on the Italian peninsula, influencing later Roman development and style. They added to Paestum, constructing a forum, an amphitheater, a temple of their own, and housing, the remnants of which can be seen today.

In 79 BC, the eruption of Vesuvius partially destroyed Paestum. Perhaps it was volcanic ash that helped to silt up the mouth of the river on which the city stood; this led the surrounding countryside to become swampy and mosquito-ridden. Saracen raids and malaria eventually drove the remaining population away, fleeing inland and uphill, some founding the nearby town of Capaccio on Mt. Calpazio.

The ticket to the archeological site includes entrance to the well-outfitted museum, filled with artifacts and one of Italy's most important archeological museums. It contains one of the most valuable collections of sculptures of southern Italy, along with the amazing funerary paintings of the Lucano period (4th century B.C.). Among these there is the so-called "Tomba del Tuffatore" (Tomb of the Diver), an exceptional example of early Greek painting tradition, and the only one of its kind. It depicts a man in mid-air as he dives into the waves below, symbolic of man's passage from life to death. It is astoundingly well-preserved and beautifully painted.

Haven't visited yet? Have questions about The Greek Temples of Paestum? Ask them here!