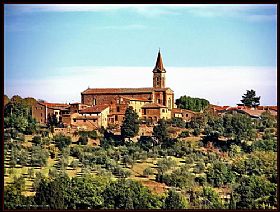 Nestled in the Chianti hills, Tavarnelle Val di Pesa is located half-way between Florence and Siena. It was a historic crossroads and stop-over point on the main route between the two republics and the road that lead to Rome, and provided a point of hospitality for lodging, meals and stables for travelers in the Middle Ages and Renaissance periods. In fact its name derives from the word "taverna" - the type of inn that provided a variety of services to travelers. It is one of the few medieval villages without fortifications.

The Badia di Passignano is an historic monastery that dates back to 395 and is still an active monastic community of the Vallombrosiano order, a reformed Benedictine monastery. The monastery has been known for centuries for its classical texts and music and was a school for Galileo. It is also known for its wine cultivation; today you can visit the cantina and taste the wines as well as dine in a restaurant at the Badia. The church has frescoes by Domenico Cresti, who is called "Il Passignano" as well as two works by Ghirlandaio. The large complex resembles a castle.

In town is the church of Santa Lucia al Borghetto which was built after St. Francis of Assisi paid a visit to the area in 1220. It is a rare example of Gothic architecture in the area. There is a nice shop called Made in Chianti that sells locally made artisan products.

Tavarnelle comprises several small villages under its jurisdiction, including San Donato in Poggio. It is located in the picturesque Chianti region of Tuscany where the hills are staked out with grapevines and patched with olive groves and small woods. It is a beautiful area where hill towns are sprinkled around and sunlight enhances every view. There are country farmhouses, gorgeous villas and art-filled churches all over Chianti.

Tavarnelle Val di Pesa is just minutes to Radda in Chianti, Greve in Chianti and San Casciano. The best wineries in Tuscany are nearby. The interesting towns of Certaldo, San Gimignano and Poggibonsi are nearby, and of course the art capitals of Siena and Florence are easily reached, as well.

Haven't visited yet? Have questions about Tavernelle Val di Pesa? Ask them here!