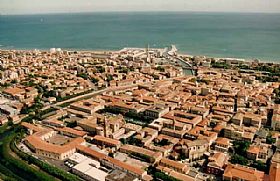 Sprawling along the Adriatic shore, Senigalli has a dual identity of modern city and old historic center. It was founded as Sena Gallica in 289 BC by the Gauls. It was the first Roman colony on the Adriatic, and the city, at the mouth of the Misa River, quickly became a trade center. Over the centuries it passed its allegiance around to find the best strategic gains, vacillating between independent state and the Papal States, between the Guelphs and Ghibellines, forming trade agreements and hosting important commerce fairs. During the Venetian Republic, Senigallia has close maritime ties to the Most Serene Republic, further up the coast of the Adriatic. The fairs were famous and brought loads of visitors and money to the city.

The ancient city is still an important part of Senigallia. The Piazza del Duca with its heavy castle and 11th century tower are the primary attraction. Next to it is the charming fountain called Fontana delle Anatre (fountain of the ducks), decorated with four fowl, guarded by four lions. It was built to celebrate the end of the malarial years once the marshes were drained. The Palazzo del Duca was the 16th century courtly residence, enlarged by the last of the dukes. It was a more simple, less decorated ducal palace than most in the area for the time.

On the canal banks is the porticoed complex called Portici Ercolani, that hosted the annual trade fairs. The Foro Annunario is another portico-lined space, that hosts the daily produce market and the weekly larger market. Piazza Roma, enclosed and more intimate, is Senigallia's drawing room and hang-out.

Sights include the Chiesa della Croce, a church with a rose-hued Renaissance facade and a Baroque interior that has gorgeous marbles and paintings. The theater, La Fenice, was built in 1838 and prominent singers and operas by Verdi and Mascagni debuted there. The next-door Area Archeologica La Fenice was the Romans' shopping center, where you can still see remains of shops and food stalls that were frequented millennia ago by bustling Roman "businessmen". The Museo di Arte Moderna is worth a visit, as is the Gallery of Sacred Art (Pinacoteca di Arte Sacra). The convent of Santa Maria delle Grazie, built in 1684, is on a hill outside town, with a peaceful cloister that has pretty frescoes lunettes that recount the life of San Francis of Assisi (commissioned in honor of Francesco della Rovere).

One of Senigallia's main draws, though, is the beach. The wide expanses of white powdery sand are some of the most popular on the Adriatic, populated by colorful umbrellas and bronzing families. The centerpiece of the beach is the Rotonda, an art nouveau pier that hovers over the water at end of a boardwalk. It started as a spa structure, was commandeered during WWII as a munitions storage, and today hosts exhibits, meetings and weddings.

Haven't visited yet? Have questions about Senigallia? Ask them here!

Have a look at our apartment rentals in Marche. 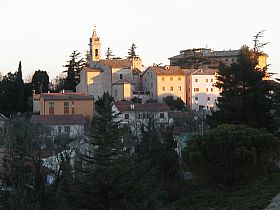 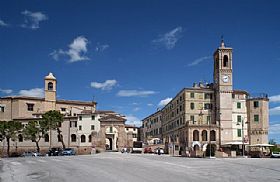