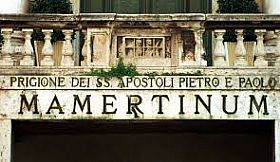 One of Rome's earliest Christian "shrines" is an often-overlooked site, right in the heart of the ancient part of the city. The Mamertine Prison is located near the Forum and was the ancient empire's jail for condemned criminals. It was here that the apostle Paul was incarcerated and is likely the place where St. Peter was held prior to his crucifixion, as well.

The prison was a grim place below ground made of two levels, the lower one accessed only by a hole through which prisoners were shoved into the dank, damp cell below. It was dark and wet and cold, and it was here that St. Paul wrote his second letter to Timothy before his execution, in which he talks of his conditions and requests a cloak to ward off the chill. Conditions were abominable in the closed, damp place where the stench must have been unbearable. It is known that a spring ran below the cave and sometimes seeped in, giving rise to the legend that it bubbled up so that Peter could baptize new converts during his incarceration.

The Mamertine Prison was talked about by Roman historians, including Livy and Sallust. There are placques on the wall lsting names of prominent prisoners and martyrs, as well as notable visitors. The prison became a pilgrimage spot in the early years following the fall of the Roman Empire, confirming the fact that these early Christian apostles had been held here. Paul had first been under house arrest but when things deteriorated and Nero cracked down on the new cult known as Christianity, his sentence was confirmed, he was arrested again and placed in this, the infamous Roman jail, to await his death. Because it was in the center of the city, more prominent inmates were taken outside the city for their executions to reduce crowds and possible uprisings by supporters. Paul was taken outside the walls to the south, while Peter's crucifixion was at a spot across the river, marked today by the lovely Tempietto by Bramante. His remains were thrown into a common grave, on the spot where, eventually, the Basilica of St. Peter would be built.

This jail marks an important place for Christians, that can be traced back to these apostles. Visit the reverent spot and then re-read the letter that Paul wrote to Timothy, which will reawaken those words with a different point of view afterwards.

The Carcere Mamertino is located below the Capitoline Hill at the edge of the Roman Forum, below the street Via San Pietro in Carcere. It is below the church of St. Joseph of the Carpenters, built in the Baroque period.

Haven't visited yet? Have questions about Mamertine Prison? Ask them here!