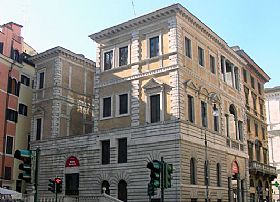 This charming little palazzo sits in the historic center near Piazza Navona, and a stone's thrown from the grand Palazzo Farnese. The owner of that regal palace also expanded the piazza and street, via dei Baullari, thus inspiring the name the name of this smaller home in its neighborhood, though it wasn't owned by the prestigious Farnese family at all. It was home to Thomas Le Roy, a French political appointee under Charles VIII in the 1500s. The palazzo's design is frequently credited to Sangallo but recent documents indicate it was the work of Jean de Chenevières, the architect behind the French church, San Luigi dei Francesi.

Today, the fanciful Renaissance building is home to a prestigious art collection, the Museum of Antique Sculpture. The vast array of statues was acquired by Giovanni Barracco and includes pieces from Egypt, Assyria, Phoenicia and Greece. The entire collection was donated to the City of Rome in 1902.

The palace is also known as "Farnesina ai Baullari" because the original main entrance was on the Via dei Baullari. The construction work that opened the wide Corso Vittorio Emanuele also lowered the street level of Via dei Baullari, making it necessary to reposition the facade of the palace onto the Corso. The elegant central courtyard retains its original look.

Haven't visited yet? Have questions about Piccola Farnesina? Ask them here!