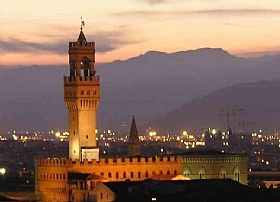 Palazzo Vecchio is the symbol of Florence, its town hall, that is a monument to history, with Roman ruins, Medieval fortress, Renaissance splendor and enduring civic power all under one roof. The palazzo was started in 1299, designed by Arnolfo di Cambio (1245-1302). The tower, aptly called Torre di Arnolfo, reaches high to the sky to be seen from a distance, purposely to impress on viewers the power of the Republic of Florence. It is still the defining monument on the Florentine skyline. Once residence of the rulers and priors of the Florentine guilds, the palace has been renovated and adapted throughout the centuries, adding to its historic appeal and beauty.

The structure was built to exude a fortress-like impression (and the defensive characteristics didn't hurt any during the turbulent times!) It was built over the Roman theater of the ancient colony of Florentia, from the 1st century AD. You can reserve a tour of the underground ruins. It was the government seat of the Republic of Firenze, as well as ruler's palace with regal apartments. In 1540, it housed the grand-ducal family at the time of Cosimo I de' Medici, before moving to the new royal residence of Palazzo Pitti, which is why this palace was called the "vecchio" palace (old). The big changes happened during that period (1550-65) thanks to Giorgio Vasari, who decorated sumptuously the interiors in order to respond to the new governmental needs of an official house for the ruling dynasty. The best artists of the time had a hand in its adornment: Michaelangelo, DaVinci, Donatello, Bronzino, Ghirlandaio and Verrocchio. Visiting the Palazzo Vecchio is truly to enter a living museum of art history and Florentine history.

Some of the highlights:

The inner courtyard, a beautiful space of loggias and frescoed vaults, with a charming angel sculpture by Verrocchio in the center.

Salone dei Cinquecento: Used as the Council Chamber to discuss civic business, most notably the reformations promoted by Girolamo Savonarola. The vast hall is surmounted by an impressive coffered ceiling but most people don't notice it as they are in awe of the stunning walls with epic scenes frescoed by Michelangelo and Leonardo Da Vinci. It is a complex and rich symbolization with historical references to the glorification of the Medici family.The Salone bears the incredible "Genius of Victory", by Michelangelo Buonarroti.

Cappella di Eleonora: An intimate and charming chapel with frescoes by Bronzino.

Ducal Apartments: the courtly residence with decorations by Ghirlandaio, Vasari, Bronzino and Donatello, gives a glimpse into how the ruling class lived.

The Quartieri Elementi: Ordered by Cosimo I de Medici as a Florentine version of the Raphael Rooms (in the Vatican) with each room dedicated on one of the four elements, personified in celestial or mythological beings.

Torre di Arnolfo: You can climb the tower for a breathtaking, sweeping view of Florence, if your legs are up for the 420 steps to reach it!

Haven't visited yet? Have questions about Palazzo Vecchio? Ask them here!

Rent a holiday home in Florence and travel like a local.