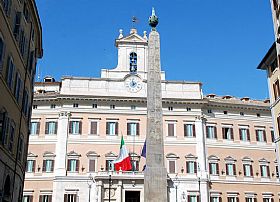 Piazza di Montecitorio sits in the center of Rome, not far from the Pantheon. The piazza is dominated by the Palazzo di Montecitorio, which was designed by Bernini for Cardinal Ludovico Ludovisi, of a wealthy family and the nephew of Pope Gregory XV. With the death of the pope, construction stopped and wasn't completed in Bernini's lifetime. The final construction was carried out by Carlo Fontana, who added the belfry on top.

The palace is now the home of the Chamber of Deputies, one of the houses of the Italian Parliament. The palace is open to visitors on the first Sunday of the month from 10:00 am until 5:00 pm. In the middle of the piazza is an obelisk brought from Egypt by Caesar Augustus, that he used to form the core of a giant sundial.

Just around the corner from Piazza Montecitorio is the Piazza Colonna, where Palazzo Chigi resides, the official headquarters of the Prime Minister. The national newspaper, Il Tempo, also has its offices here. News crews with video cameras are a common sight here, waiting to get footage and news bytes of the influential politicians who wander between these two important piazzas.

Haven't visited yet? Have questions about Piazza di Montecitorio? Ask them here!