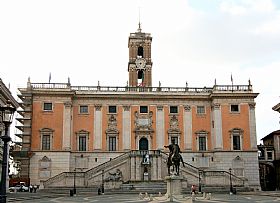 The Palazzo Senatorio sits on Rome's Piazza del Campidoglio, the administrative square that was redesigned by Michelangelo. The piazza is on the aptly named Capitoline Hill, above the Forum and the gleaming monument to Vittorio Emanuele.

There was an ancient building here, the Tabularium, but the Palazzo Senatorio was constructed in the 12th century, a heavy stone structure with an arcaded upper story, following the standard Medieval civic building model. It was restructured in the 1500s by Michelangelo and restyled in Renaissance splendor, retaining the grand staircase and making it an elegant, commanding presence in the center of the piazza. An ancient statue is dedicated to Rome itself.

The Palazzo Senatorio has been Rome's City Hall since 1870. It is next to the Capitoline Museums.

Haven't visited yet? Have questions about Palazzo Senatorio? Ask them here!