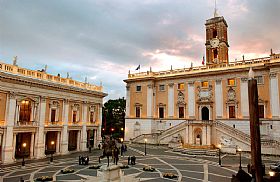 Billed as the world's oldest national museum, this complex houses one of the most important collections of ancient art. It was established in 1471 by Pope Sixtus IV when he donated a collection of ancient bronze statues to the People of Rome, establishing a museum in the ancient and political center of the city on the Capitoline Hill. The series of buildings on the trapezoidal-shaped piazza collectively are known as the Campidoglio (capital) and served as the city's center of government. The Palazzo Senatorio still houses Rome's municipal government, while the other palaces have been converted to museum space.

The Palazzo dei Conservatori was the seat of magistrates in the Middle Ages; it's frescoed halls still host important meetings. The Palazzo Nuovo is the third part of the complex and is linked to the Palazzo dei Conservatori by way of an underground gallery below the piazza. Together, they display an impressive collection of ancient Roman artifacts, including sculptures, inscriptions, coins, jewelry and mosaics. The famed bronze statue of Romulus and Remus, the symbol of Rome, is housed here, as is the sculpture of Marcus Aurelius, the world's first free-standing equestrian statue.

In addition, you'll find rich tapestries, and some works from ancient Greece and Egypt. Important paintings from the Medieval and Renaissance eras are found here, too - look for works by Veronese, Tintoretto, Caravaggio, Titian and more.

The Musei Capitolini also offers a bookshop and a nice cafe, which has a rooftop terrace with lovely views of the rooftops and domes of Rome.

Haven't visited yet? Have questions about Capitoline Museums? Ask them here!