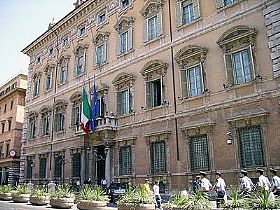 The imposing palazzo near Piazza Navona guarded by uniformed Carabinieri is a Renaissance building that is home to the Italian Senate. The symmetrical structure was first built over the ancient ruins of the Baths of Nero by monks of the Abbey of Farfa to provide lodgings and a meeting center for Franciscan pilgrims to Rome. It was purchased by the Medici family in 1505 and was home first to Giovanni de Medici, who became Pope Leo X and then his cousin, Giulio, who became Pope Clement VII. After his death, it passed to Alessandro de Medici and then his wife, Margherita, who was called "Madama Margherita". Catherine de Medici lived here for a time before marrying King Henry of France in 1533.

The ordered rows of windows with different pediments shows Renaissance symmetry; the Medici reconstruction of the building was designed by Giuliano da Sangallo. After the extinction of the Medici family, the building was used by the Papal States as offices and then was utilized as government offices by the Kingdom of Italy. It has housed the Senate since 1871.

Palazzo Madama can be visited on the first Saturday of the month. Otherwise, it can be viewed from the exterior on Corso del Rinascimento, just off Piazza Navona, where you will likely see government dignitaries arriving in black cars, carefully shepherded into the building by the armed national police outside.

Haven't visited yet? Have questions about Palazzo Madama? Ask them here!