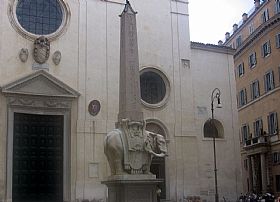 When the Domenican friars found an obelisk in their garden in 1665,with hieroglyphics on four sides, they headed the writing on the wall, as it were, and decided to dedicate it Eternal Wisdom. Pope Alexander VII decided to place it in the piazza in front of the church, which had become an important monument in the city, adorned with works from the best artists of the Renaissance. (Michelangelo, Fra Lippo Lippi, Fra Angelico, and Sangallo the Younger are a few of the artists you'll find represented.) The Dominicans attracted wealthy and powerful patrons, including the Colonna, Orsini, Carafa, Aldobrandini and Pope Alexander VII's own family, the Chigi.

The Egyptian relic is one of 13 ancient obelisks brought to Rome from Egypt. This one, along with the taller version in front of the Pantheon, was erected in the area by Emperor Domitian. The rose granite structure stands 5.47 meters tall and came from Eliopoli. Over the centuries it was forgotten. Then, the Dominican friars found it in the garden and it was a joyous event.

Pope Alexander VII commissioned Dominican architect Father Domenico Paglia to design the base. His eagerness to impress the pope took him over the top; his design would have it rest on a base of six hills, the "montini" that appear in the Chigi family coat of arms, with a dog resting in each corner, as the dog was the symbol of the Domenican order. The "domini canes" or "dogs of the Lord" gave the order its name. The pope rejected it, though, as he wanted to highlight the theme of wisdom. He brought in Bernini, who had already become an acclaimed artist. The seething anger of Father Paglia would create problems in the seemingly simple project - a base for an obelisk!

THE BASE AND THE FEUD

Bernini like the symbolism of the elephant a sign of strength, heeding the Pope's desire of highlighting a strong mind and eternal wisdom. Having already mastered the art of load-bearing principles in his Four Rivers Fountain in Piazza Navona, he designed the elephant to carry the obelisk, with the weight of the stone being laid on the stout legs of the elephant. The fountain has grand empty space, clearly demonstrating that it's possible. But Father Paglia was incensed and insisted that the sculpture couldn't possibly bear the load, and made such a fuss about it, springing from his jealousy, that Bernini was ordered to place a hefty block of stone below the elephant to "shore it up" and ensure the weight would not cause the structure to collapse (and thereby destroy this ancient artifact, and the hieroglyphic wisdom written on it).

The noted artist was outraged. He complied, and draped a carved decorative shawl over the back of the elephant to try to hide the stone block. On the shawl he engraved the Chigi family crest. But his professional sensibility was angered, so he took a small revenge: he positioned the elephant so its hind end faced the Dominican monastery (where Father Paglia lived), swishing the tail just slightly askew in pointed symbolism!

The inscription highlights the theme that the Pope desired: The elephant, the strongest of beasts bears ancient wisdom - "... you need a strong mind to hold solid wisdom".

In later years, the chubby-looking elephant came to be jokingly called "il porcino", or "little piglet".

Haven't visited yet? Have questions about Obelisk of Minerva? Ask them here!