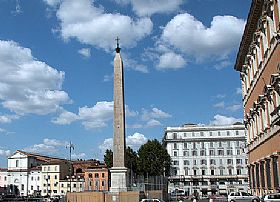 The Lateran Obelisk is the highest and oldest in Rome, located in Piazza San Giovanni in Laterano. It is between the basilica and the Lateran Palace.

Carved in red granite, it measures 32.18 meters (45.70 meters with the base) and weighs 230 tons. It originally faced the Temple of Amun in Thebes (Karnak, in Egypt), and was built by Pharaoh Tuthmosis III in the 15th-century BC. MOre than 1700 years later, in 357 AD, the Emperor Constantine, brought this obelisk to Rome as a decoration for the Circus Maximus (the largest Roman stadium for chariot races).

He had to build a special ship to transport the monument to Rome. More than twelve centuries later, Pope Sixtus V had it dug up from the ruins of the Circus Maximus, to restore it and place it in front of the old entrance of the basilica of San Giovanni in Laterano instead of the equestrian statue of Marcus Aurelius - once believed the statue of Constantine - which was moved to Piazza del Campidoglio. Favored architect Domenico Fontana placed it on a base of three steps, with a fountain, which was once topped by a statue of the sainted Evangelist.

Haven't visited yet? Have questions about Lateran Obelisk? Ask them here!