Basilica of San Giovanni in Laterano 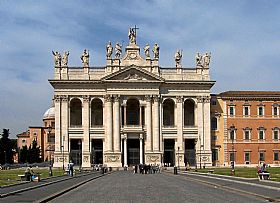 While many think Saint Peter's is "it", the Basilica of San Giovanni in Laterano is the actual cathedral church of Rome. It is the official ecclesiastical seat of its bishop, therefore the Pope. The basilica is located in Piazza di Porta San Giovanni, in the southern part of the historic center, and is the most important and most visited church after St Peter's Basilica.

The church was founded by the Emperor Constantine in the 4th century, though it has gone through many transformations through the centuries. The current style is thanks to the great architect Borromini, who embellished its interior in high Baroque style, though he left the exterior untouched. It is a bright and airy church which uses natural light to play on the marble and give a feeling of openness.

The next-door palace was the papal residence for several centuries before moving to Avignon and then to the Vatican. Larger than life statues of Christ and the Apostles flank the facade. Don't miss the cloister, a hidden oasis with gorgeously carved and twisted columns and marvelous marble mosaics. The detached octagonal baptistry is decorated with mosaics, as well, dating to the 5th century. A highlight is the Scala Santa (Holy Staircase), which is said to have been brought from Jerusalem and were the stairs that Christ climbed to his trial.

San Giovanni in Laterano is a high pilgrimage site, but a delightful church in its own right and is located in a nice neighborhood where you can a feel for the "real" life of Rome with shops, restaurants and cafes frequented by the local crowd.

Haven't visited yet? Have questions about Basilica of San Giovanni in Laterano? Ask them here!