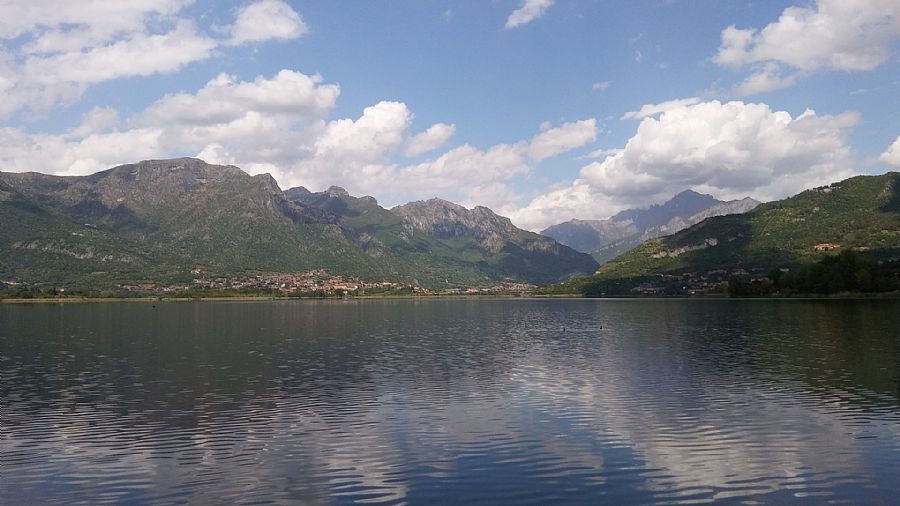 Lake Annone is a placid place not far from Lecco and Lake Como, a small but tranquil spot. It has a little peninsula, called Penisola di Isella, that creates a narrow channel that cuts the lake in half. It is believed that there was once a Roman bridge to span the gap and united the two strips of land, and allowed passage between Lecco and Como in ancient times. Lake Annone is at the foot of Mount Barro and Mount Cornizzolo - climb up the heights and get a view of the lake and its unusual form.

There is a pleasant pathway that encircles the lake with parts right on the water and other parts through green woods and the hamlets that sit at at the lakefront. The paths are year-round and used by walkers and cyclists. There are plenty of places for a lazy day picnic. Or, rent a canoe at Annone Brianza or Oggiono and spend some time paddling around. The lake does not allow any motor craft at all.

Like the other alpine lakes, Annone is surrounded by loft mountains, but this is especially appealing for its lack of publicity and crowds, and its natural environments.

Haven't visited yet? Have questions about Lago di Annone? Ask them here!

Have a look at our holiday homes in Lombardy.