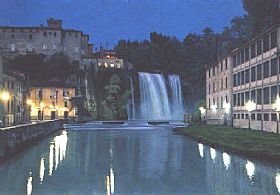 Isola del Liri is an interesting little town near Frosinone, in southern Lazio. It is an "island" between two branches of the Liri River, and is known as the "citta' delle cascate" for the waterfalls you find there. These waterfalls helped bring prosperity and industry to Isola del Liri, as they were used to power paper mills, wool mills and felt factories. There is a pleasant walkway along the river's bank.

It was occupied by ancient tribes before being taken over by the Romans, then the Byzantines and Lombards. It was the ducal seat for the noble Boncompagni family. The prominent landmark is the Castello Boncompagni-Viscogliosi, which rests between two waterfalls. It was built in the 1100s as a defensive structure but then became the domain of several wealthy families, starting with the influential Della Rovere, the Boncompagni and then the Sforzas, who turned it into a regal residence with frescoes and gardens.

Isola del Liri is also called the "citta' della musica" and for this standing is a sister city of New Orleans, Louisiana. It's famous for its annual Blues Festival, the biggest of its kind in Italy, a 25-year tradition that takes place every July and attracts big names from the jazz and blues world.

Just a couple of kilometers from town is the Church of San Domenico, a Romanesque basilica which is said to be built on the site that was the villa of Cicero.

The region's cuisine borrows from both Lazio, Abruzzo and Campania whose borders run nearby, with lamb, minestrone, gnocchi and timballo all playing important roles on the table. The town has some characteristic medieval streets to meander, stone buildings, and a nice position in the green, almost wild hills of the Lazio borderlands.

Haven't visited yet? Have questions about Isola del Liri? Ask them here!