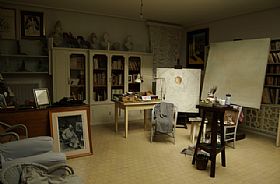 Avant garde artist Giorgio De Chirico was the creator of the metaphysical movement in art, which greatly influenced the Surrealist artists. He spent thirty years living and working in a spacious home on Piazza di Spagna in the center of Rome, the city's cultural and artistic heart. Nearby Via Margutta, Via del Babuino and Via Condotti drew artists and writers, and Piazza del Popolo was a hang-out of politicos.

The apartment is placed inside the historic Palazzetto dei Borgognoni and is run by a foundation established by De Chirico's wife. He lived and worked here, painting, sculpturing and writing, for 30 years; his wife remained in the house until her death in 1990. They moved into the home in 1948, just as the art scene in the area was flourishing and many artists and craftsmen had their studios in this part of Rome.

The house museum is open by appointment, and provides an intimate look into the artist's life and an up-close viewing of his works. The main salon reflects the buildings noble history in a luxurious room draped with red damask decorated with ornate frames, marble and regal furnishings. It was the place for gatherings and receptions, and De Chirico selected paintings and sculptures to introduce his visitors to the scope of his themes and subjects.

The second floor was the private quarters with bedrooms and his studio. The skylight floods the work room in natural light; his palatte, tubes, and plaster casts are still as he left them. His personal library is here, as well. On the third floor is access to the apartment's panoramic terrace, overlooking the park behind, the church of Santa Trinita' at the summit of the Spanish Steps, and the city of Rome down below.

For RESERVATIONS to visit the De Chirico House Museum, click here for the Foundation's Reservation Page. There are three tours a day, at 10:00 AM, 11:00 AM and 12:00 noon but reservations are mandatory. Cost is €7.

Haven't visited yet? Have questions about Giorgio De Chirico House and Museum? Ask them here!