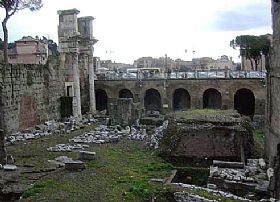 The Forum of Nerva was entitled and opened in 97 AD by emperor Nerva, although it was conceived and built by emperor Domitiano. Domitiano wished to give a formal appearance (monumental) to the free area located between the Temple of Peace and the Forum of Augustus, where there was located the way of Argileto which was leading to the Suburra and the Esquiline.

The Forum of Nerva, also known as Forum Transitorium, is formed by a long, narrow square (120 meters x 45), devoid of porches on both sides replaced by a huge arcade leaning against the outer wall of lava stone blocks.

Today you can still see a stretch of the south-eastern side with two fluted columns and white marble Corinthian capitals (in the Middle Ages were nicknamed "the Colonnacce") over which runs a full entablature with a frieze in relief (connected to the myth of Arachne) and above all this, there is a high attic with low relief dedicated to Minerva.

On the bottom side of the Forum, it was located the Temple of Minerva (maintained until 1606, when it was demolished to use the materials for the construction of the fountain of Acqua Paola sul Gianicolo). It was built on a high podium with steps and had a front porch with six columns on the façade and three along the sides. The cell, inside, was formed by two orders of columns and an exedra rectangular bottom. To the right of the Temple, there was an arc (in the Middle Ages it was called "Noah's Arc") located between the podium and the perimeter wall of the Forum, from which it was possible to pass into a great environment, forming an irregular trapezium opening to the neighbourhood of Suburra.

Haven't visited yet? Have questions about Forum of Nerva? Ask them here!