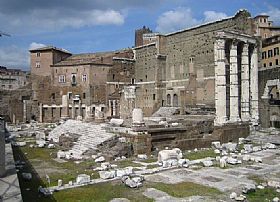 Wandering through the section of the Imperial Forum that was dedicated by Caesar Augustus today might seem like a small portion of the overall structure, but the public works were groundbreaking at the time. The second phase of construction in the public heart of Rome, it was built next to Caesar's Forum and required land negotiations and purchases to accomplish. It ushered in the tradition of each emperor leaving his mark with civic constructions.

His forum was the first of his notable construction projects, and according to legend was undertaken as an oath made to the Roman god Mars beseeching him for victory in the Battle of Philippi in 42 BC to avenge the murder of his adoptive father, Julius Caesar. When he was victorious, he lived up to his pact using the spoils of the war to fund it. The project took 40 years to complete; when it was dedicated in 2 BC it featured a Temple to Mars, the god of war, where generals were blessed before battle, where the Senate met to declare war and establish peace, and where the spoils were dedicated. The forum also featured buildings for legal proceedings and lots of statuary - of himself as a heroic warrior along with other military heroes and likenesses of the Julian-Claudian lineage to establish his importance and greatness. The Forum was backed by a massive wall of tuff to separate it from the crowded plebian quarter of Subura, the remnants of which can still be seen today.

Caesar Augustus was emperor but established Republican norms and laid the foundation of the Roman Empire. His era of rule initiated the famed Pax Romana, a two hundred-year period of peace and Augustus commissioned and dedicated the Ara Pacis to inaugurate that peace. He enacted tax reforms, enlarged the road network, instituted a courier system and established police and fire forces in the republic. He also rebuilt much of the ancient city of Rome, so that on his deathbed he is purported to have said, "I found a Rome of bricks, I leave to you one of marble." He constructed arches, temples and public baths, in addition to the Forum that bears his name and a family mausoleum.

Augustus' contributions to the empire were so extensive that the month of August was renamed in his honor. It has previously been called sextilis, or the sixth month. So next time you're enjoying a peaceful August holiday in Italy, think of Augustus and his Pax Romana and the marble monuments he left behind.

Haven't visited yet? Have questions about Forum of Augustus? Ask them here!