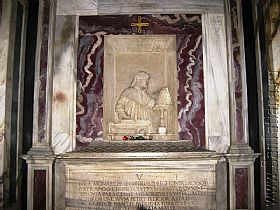 While Florence is the famous poet's birthplace, his mortal remains are in a tomb in Ravenna, having been cast out from his own city. The writer who became famous for penning his works in the Tuscan dialect is considered the father of modern Italian.

Dante Alighieri was born in Florence in 1265 to a minor noble family; his parents died while he was young, and he studied philosophy and theology under the Franciscans. He began writing sonnets when he was about 18. He is most famous for The Divine Comedy, a philosophical poem about man's eternal fate set in three cycles: Purgatory, Heaven and Hell. While he married a noble woman by family arrangement, he was in love with a woman named Beatrice, the unrequited love is documented in his poems, and notably his first book, The New Life. It was written in Italian rather than Latin, starting a trend for medieval writers. The muse Beatrice died 1290.

The tumultuous political scene of Florence at the time led to divisions and factions, and Dante was exiled for his views, by the leaders of the Black Guelphs who were in power at the time and allied with Pope Boniface VIII (all of whom would be featured in Hell later on in Inferno.) Dante spent his exile traveling and writing, before settling in Ravenna upon the invitation of the city's Prince Guido Novello in 1318. He finished his masterpiece here, most notably, the portion Paradiso. He died in 1321 at the age of 56 while returning to Ravenna from a diplomatic trip to Venice, presumably of malaria. A century or so later, after his fame grew and the Florence realized their exiled son had become the country's greatest writer, they petitioned for his remains to be returned to Firenze. Ravenna sent an empty coffin, and have jealously kept Dante in their fair city, which had been his final refuge.

The tomb of Dante Alighieri is in a neoclassic style temple with a marble sarcophogus. There is a relief carving of the bard at his writing desk. The tomb is in Via Alighieri near the Basilica of San Francesco. The Franciscan's carefully guarded his remains, even hiding them below the Braccioforte Portico when Florence sent emissaries to try to recover his bones. The "tomb" in the church of Santa Croce in Florence that was prepared for him remains empty, as Ravenna has defiantly refused the city the remains of one they had cast out in exile. Above the poet's tomb is an oil lamp that burns with Tuscan oil sent annually by the city of Florence in perpetual penance for permanently banning Dante from his birthplace.

Haven't visited yet? Have questions about Dante's Tomb? Ask them here!

Have you seen our self-catering apartments in Emilia Romagna?