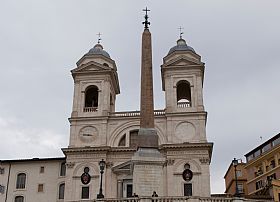 One of Rome's highest churches is perched above the Spanish Steps and is, perhaps ironically, a French church. At the summit of the now-famous staircase that was actually financed by French authorities, it bears the name "Spanish Steps" because of the embassy of that country that occupied the lower area and gave the piazza its name. The church and grand beloved staircase is owed to France, though. The name is officially Santissima Trinita di Monte Pincio (most holy trinity of Mt. Pincio, referring to the hill on which it sits.) There was once a vineyard here, that had been donated to an order of friars from French King Charles VIII. The adjoining convent remains.

Built between 1502-and 1519, it was given Gothic elements to celebrate the great French Gothic cathedrals, especially notable in the pointed arch and the cross-vault ceilings. The twin bell towers give the church symmetry, one with a clock and the other a meridian. The design is attributed to Giacomo della Porta. In front is a tall obelisk, one of the last erected in Rome, from the Imperial age made to imitate Egyptian style. It was placed here by Pope Pius VI.

Inside are some marvelous works of art, most notably the Deposition fresco by Daniele da Volterra and the fresco cycles by the Zuccari brothers. They labored over a 25 period to create incredible scenes of the Old and New Testaments. A perspective gallery by Andrea Pozzo connects the church to the monastery. There is a majestic pipe organ by a French master, too. The Borghese Chapel bears the family crests and a Baroque sculpture of the Pieta'.

The now-famous staircase was built in 1723-26 to give pretty access to the church and Pincio hill, overcoming the steep disparity from the piazza to the church.

The church is open daily and is in use, though Mass is said in French. Trinita' dei Monti is one of five French catholic churches in Rome, and is part of the Fraternity of Jerusalem.

Haven't visited yet? Have questions about Church of Trinità dei Monti? Ask them here!