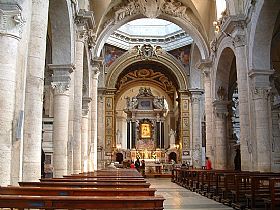 The church is of the Augustinian order, built at the Porta Flaminia, where the ancient gate opened to the Via Flaminia, one of the major, important Roman roads, where it departed the capital city through the Aurelian wall. Originally built in Romanesque style, it was reconstructed in the 1470s in the early Renaissance; the facade was given a Baroque facelift in 1650s by Bernini, who also designed the apse. Bernini provided sculptures, bringing the Biblical figures of Habakkuk and Daniel to life, as well as providing angels who hold up the organ balcony.

Santa Maria del Popolo is one of the most important churches in a city full of churches - for the artwork contained within. The Piazza del Popolo is located near the Tiber River, to the west of the Piazza di Spagna and the Spanish Steps.

Haven't visited yet? Have questions about Church of Santa Maria del Popolo? Ask them here!