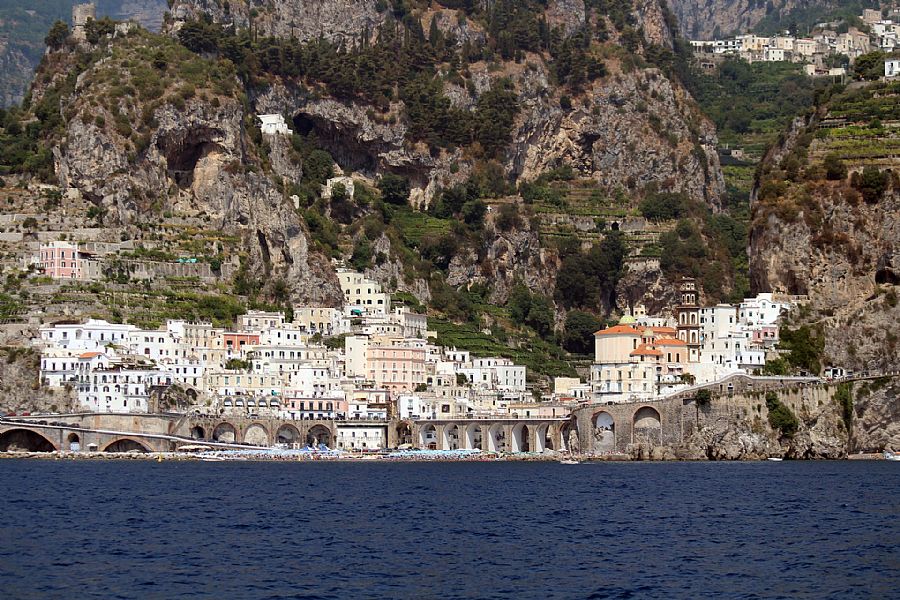 Go east from Amalfi for about five minutes and you'll bump into the smallest but one of the most enchanting villages on Italy's Amalfi Coast - Atrani.

It is the best-preserved fishing village in the area. The historic town center is a small jumble of pretty houses that cutely cradle the main piazza. The Church of St. Salvatore with its simple stone fountain, reaches upward towards the valley and the rocky inclines, which are criss-crossed with tended gardens and lemon groves.

Tucked away from urban traffic and noise, the center of Atrani is cuddled in among its ancient houses, which boast beautiful balconies full of flowers. Piazza Umberto I faces a peaceful patch of sandy beach and sea, reachable by a lovely path. The piazza's hip atmosphere and architectural details make it one of the most attractive open-air venues in this part of Italy... sometimes even preferred to the more famous piazza in Capri! :-)

Atrani was historically a part of the Maritime Republic of Amalfi, with a similarly styled church bearing a bronze door molded in Constantinople. San Salvatore de' Bireto has ancient origins; it was originally founded in 940, but later revised in Neoclassical style. The bronze door was made in 1087, by Pantaleone Viaretta, the same artist who cast the doors for the cathedral in Amalfi. The Church of St Salvatore was used to celebrate ceremonies of election and installation of the Doges, the once-powerful rulers of the Republic.

Atrani is situated between sheer cliffs and the turquoise crystalline sea, near the so-called Valley of the Dragon. The village used to be summer residence of noble families and Doges of Amalfi. Still quiet and picturesque, its winding streets have remained largely unchanged.

The beauty of Atrani lies in the scenic beach and the intricate maze of lanes and houses, built practically on top of each other, that make it look like a nativity scene, especially at night with the lights glimmering.

If you are fond of religious art, take a look at the collegiate church of St Maria Maddalena, built in the XIII century by the people of Atrani in honor to the Madonna for having saved them from Saracen marauders. It has a single rectangular room, capped with a barrel vault and lit by two large baroque windows. The glazed tile dome and square bell-tower have become the symbol of the Atrani's simple skyline. Next to the church is Masaniello's Cave, and below is the house where Masaniello (Neapolitan fisherman, who became leader of the revolt against Spanish Habsburg's rule in Naples in 1647) was born, built on top of a flight of 500 steps.

A little way above the old public road that connects Atrani and Amalfi is the Cave of the Saints, believed to be part of an old Benedictine monastery founded in 986. The entrance to the small cave, which opens onto a terraced lemon grove, is enclosed by one of the arches supporting a water channel. The cave's walls are decorated with Byzantine-style frescoes from the 12th depicting the four evangelists. In the green background there is the warrior, St George.

Enjoy a wander around, refreshments at one of the outdoor bars, or a seafood meal on the waterfront.

Haven't visited yet? Have questions about Atrani? Ask them here!

Enjoy the comfort of a home rental in Atrani. 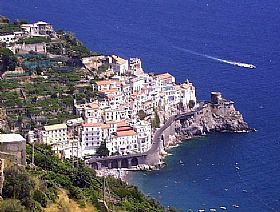 Amalfi is a graceful place: its cluster of white buildings gleams like a pearl in the strand of towns strung along the Amalfi Coast. 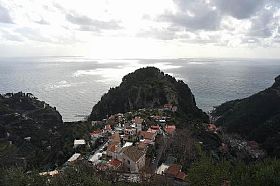 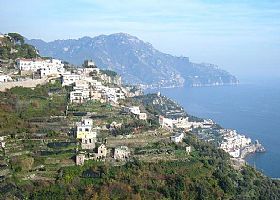 The hamlet of Pogerola is compact but packs a panoramic punch.