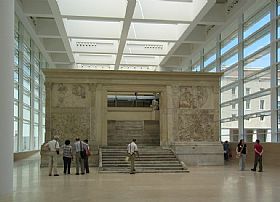 Ara Pacis Augustae is a Roman altar originally built in order to celebrate the Emperor Augustus and the peace after the bloody campaigns of Spain and Gallia. The Roman senate decided to put up the monument in the XIII century BC. It was collocated into the Campus Martius in the IX century BC. It was a rectangular podium (11x10 metres), supporting the altar in the strict sense of the word, surrounded by a fence with accesses only from the shorter sides. Just the front side was provided with steps. The internal part, very sober, represents a wooden fence on the lower side, probably to witness the presence of a real fence before the marble construction. The upper part has been sculpted with festoons hanging on "bucrani" (ox skulls), just above every festoon is depicted a cup, used to pour liquids onto the altars during the ritual sacrifices. The exteriors are much more complex than the interiors, they are not even linked to each other in terms of style and themes.The portals are flanked by four reliefs of which two are still intact: they represent the story of the twins Romolo and Remo and the she-wolf suckling them.

Then the revival of Rome happened with Augustus; Aeneas offering a sacrifice to the Penates (household gods), recalling Augustus’ origins – the Gens Iulia, from Iulo, Aeneas’s son. The personification of the Earth, set between Sky and Water, to symbolize the position of the elements and the richness of the world, plenty of fruits and the goddess Roma seating on a pile of weapons, meaning that Roma had earned the glory fighting.

The Historical Frieze occupies the whole longest sides of the monument. It probably represents the Ara Pacis’ opening ceremony in the IX century BC. However, the presence of anachronistic personages like Agrippa, who died before the IX century, and situations, like Augustus in the Pontifex Maximums capacity (position held later), might make this frieze a sort of glorification of the Augustan family.

The altar had been forgotten for centuries: during the Adrian Age (117-138 AD), the raising of the soil-level around and the frequent inundations of River Tiber, the Ara was already partially underground and protected by a containment wall. The Ara was accidentally rediscovered from 1568: from the foundations of Palazzo Peretti, later called Palazzo Fiano-Almagià (at the corner between Via in Lucina and Via del Giardino Theodoli), emerged 9 blocks of sculpted marble. The Grand Duke of Tuscany purchased some of them to make a donation later on to Florentine Uffizi.

In 1859, during the strengthening works of Palazzo Peretti - in the mean time passed to the Duke of Fiano - there were found by chance the altar’s basement and a number of sculpted fragments, which were preserved inside the building. Some other slabs were given to the Vatican and walled in Villa Medici. The archaeologist Friedrich von Duhn in 1879 theorized for the first time that the marble blocks scattered here and there, could belong to the the Ara Pacis Augustae.

Unfortunately, the presence of a spring of water and potential dangers for the building’s stability stopped the works until February 1937, when the fascist Council of Ministers authorized the immediate resumption in occasion of the bimillennium of Emperor Augustus’s birth. According to the newspapers of the time, archaeologists and workers resorted to a cutting edge technique: they froze the soil and create an ice barrier to stop the water infiltrations. In this way they were able to shore up the building and substitute the ancient basement with cementitious materials.

The monument was gradually recomposed and the project was commissioned to Giuseppe Moretti, with the cooperation of Guglielmo Gatti into the laboratories of the Museo Nazionale Romano. They were able to recover and recompose the original slabs preserved into the Uffizi, while the ones kept into the Louvre, Villa Medici and Vatican Museums were casted.

Haven't visited yet? Have questions about Ara Pacis Augustae ? Ask them here!