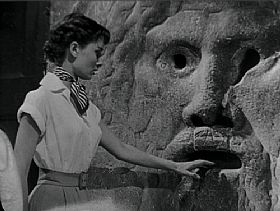 One of Rome's hokey but endearing tourist attractions is the Mouth of Truth. It was made famous in the film, Roman Holiday, when Gregory Peck played out Rome's lie-detection legend by putting his hand in the mouth of the stone carving. "The legend is that if you're given to lying, you put your hand in there and it will be bitten off." Even fifty years after the movie, this stone face with an open mouth is a widely popular attraction due to that famous scene where Gregory Peck pulls his hand out of the mouth, with his arm up his sleeve, completely astonishing the young Audrey Hepburn.

The Roman marble mask has been the truth-o-meter for Rome for centuries, but a couple of millennia before it was mounted in the Temple of Hercules Invictus as a representation of the river god, placed over a spring where water bubbled out of the mouth. During the Middle Ages it was moved and was an anonymous post box of sorts, starting its reputation as a way to discover the truth - where informants could slide papers of denouncements or defenses through the mouth to accuse enemies, decry treachery, or defend someone against false accusations. At some point, the carving, which looks like a man's face, was moved to this spot under the portal of the Church of Santa Maria in Cosmedin.

For decades, Roman mothers have extracted the truth from their children under threat of dragging them down to the Mouth of Truth, to test their stories. Now, it is a cute photo-op to line up with the other tourists and have your picture taken with your hand in the mouth - are you prone to lying? Or can you safely insert your hand without a fear?!

Haven't visited yet? Have questions about Mouth of Truth? Ask them here!