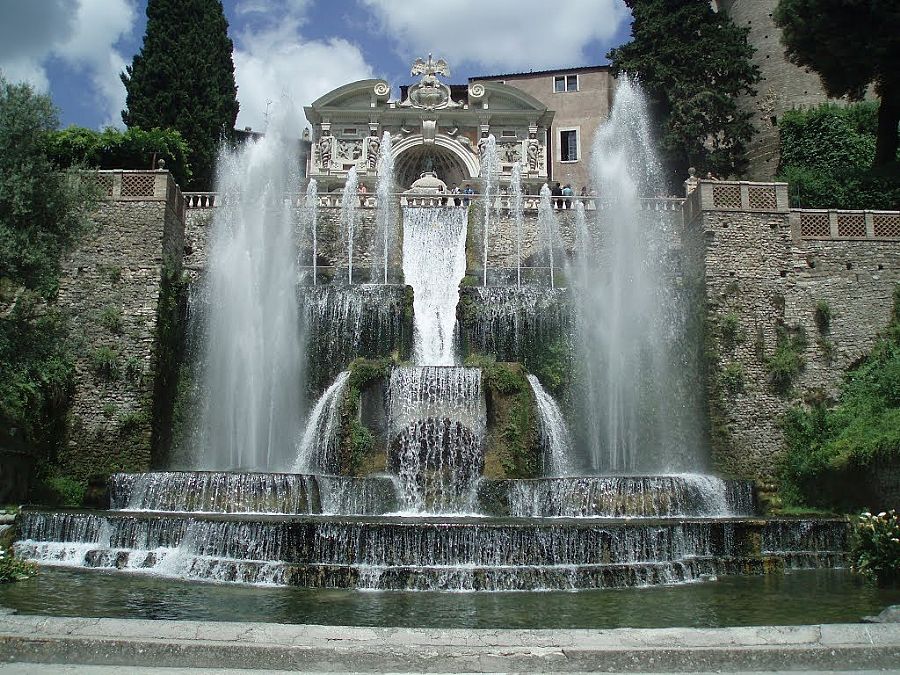 Just a few miles from Rome in the cypress-studded Tivoli hills lies a magical garden called Villa d'Este. The park is a masterpiece of landscaping that combines art, history and innovation and is a UNESCO World Heritage Site. It is a wonderland of playful fountains and fanciful sculptures.

The property was originally a monastery that Cardinal Ippolito d'Este took over and converted into a proper villa, beginning in 1550. He was simultaneously constructing a palazzo in Rome for official functions and formalities, but wanted a country estate for relaxing and entertaining. He was drawn to the good air in the hills and the history of the area, with Roman ruins sprinkled around the Tivoli area, most notably Villa Adriana. There were Roman remains on this property, as well. He wouldn't live to see the final result of the works he put in motion, but Villa D'Este would become an example of mannerist gardens that would be emulated around Europe. The design was conceived by artist-architect-archeologist Pirro Ligorio. The cardinal died in 1572; the next cardinal in the D'Este family, Alessandro, took up the works, increasing the plan and bringing in Gianlorenzo Bernini for some of the fountains.

Ippolito D'Este aimed to revive the stately and grand court life of Ferrara and created an elegant atmosphere at the villa. The most noted part is the garden, enriched with a plethora of fountains in various forms. There is a Roman acqueduct and underground water that feeds them with strong pressure; coupled with innovated hydraulics the fountains have sometimes whimsical playful effects. It passed to Rinaldo D'Este. It was consigned to the State following WWI.

Some of the highlights include the Fontana dell'Organo and Fontana del Bicchierone, both by Bernini. The "Organ Fountain" actually sounded musical thanks to a hydraulic water-powered organ built into it! There is the fountain of the dragons and the epic masterpiece, Cento Fontane, a walkway with 100 spouts, made more dramatic by the shiny effect of the polished marble with which it was constructed. There are many landscaped corners and hidden grottoes to explore. The garden's terraces were inspired by the hanging gardens of Babylon. A sculpture called La Rometta represents "Rome Enthroned".

Villa d'Este is sometimes referred to merely as the "garden of Tivoli," though Tivoli really is the town where it is located.

Haven't visited yet? Have questions about Villa d'Este? Ask them here!