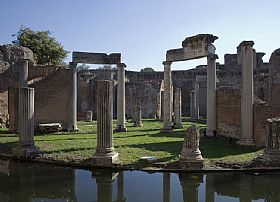 The opulent villa and gardens of Villa Adriana transport you to the ancient world in an oasis of tranquility. The ancient villa was built as a retreat for the emperor Hadrian in 118 AD to withdraw from the chaos of Rome and from the pressures of governing an empire. He had a penchant for theatrics and used the most modern technology of the time to create artificial settings and special effects. The sprawling estate was the largest built in the Roman Empire, encompassing an area as big as Pompeii.

The park was built to recreate features from ancient Greece and Egypt, as well as modern (for that time) Roman architecture. There were more than 30 buildings in all scattered around the enormous gardens. Many were characterized by domes and barrel vaults. There was an immense residence to house the emperor and his large court, along with a theater, two bath complexes, libraries, a stadium and greenhouse. A lake with an island was constructed, as well as artificial pools, grottoes and underground tunnels. Meandering pathways are lined with fanciful fountains and lead to hidden corners and hedge-rowed lawns. More than 400 statues decorate the estate.

The villa was abandoned after the fall of the empire and only rediscovered and renovated in the Middle Ages. Excavations were undertaken in 1600 under the direction of Ippolito d'Este, son of Lucrezia Borgia.

A visit to Vila Adriana is a step back in time and a respite from the traffic and troupes of tourists in the Capital City. Take a picnic and enjoy the grounds amidst historic wonders.

Haven't visited yet? Have questions about Villa Adriana? Ask them here!