Via Duomo and the Cathedral of Assumption 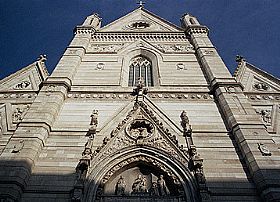 It used to be called Vicus Radii Solis (sunbeam's street) and was one of the main streets of the Roman Neapolis. Once enlarged, Via Duomo – the street that leads to the Dome – has become popular for the numerous elegant vestments and brides shops. The local handicraft makes notable statues representing Christ, the Virgin, the most important Neapolitan Saints, altar cloths and holy vessels. Halfway you will admire the Cathedral of Assumption, built at the behest of Charles I of Anjou, on the site of early-Christian buildings: the basilicas of of St Restituta (today incorporated into the Cathedral) and Stefania. Revised, enlarged and changed many times throughout the centuries, the Dome preserves oeuvres of inestimable value. Inside, red marble pillars from previous ages mark the central nave, which displays as follows: a seventeenth-century christening font made of a basalt basin; the busts of cardinals and bishops who had donated important works of art to the Dome over the centuries; a wooden coffered ceiling with late Manerist frescoes and marvellous paintings by Luca Giordano and Francesco Solimena visible in the transept. Not to be missed is the beautiful Angevin Chapel Capece-Minutolo, where Boccaccio set the novel "Andreauccio da Perugia".The chapel has remained intact throughout the years, with exquisite medieval frescoes and graves; the Succorpo of St Januarius, guarding the bones of the saint underneath the high altar, was made of white marble, designed by Bramante.

The real treasures of the Dome are concentrated in the Chapel of the Treasure of St Januarius: over the entrance is a two-faced bust of the Saint by Gennaro Monte. The chapel is richly decorated with frescoes by Giovanni Lanfranco and Domenichino and paintings by Ribera. The chapel keeps bronze and silver statues of the Saint and paintings connected to his life. Next to the altar is the reliquary bust in gilded silver containing the Saint’s bones, commissioned in 1304 by Charles II of Anjou. This opulent feat for the senses prepares the soul to receive and take part into the miracle of liquefaction of St Januarius. On the right side of the high altar is the Tocco or Saint Aspreno Chapel which maintains its original French Gothic look and frescoes from the fourteenth and sixteenth centuries. The Minutolo chapel dating to the late-Gothic period has a mosaic floor with family herald at the centre and fifteenth century frescoes on the walls.

In the right transept there is the chapel of the Virgin Mary received into Heaven (Assunta) which takes its name from the panel painting by Perugino and school executed at the beginning of the sixteenth century.

Just in front of the Old Treasure, you will find the splendid early-Christian chapel of St Restituta, whose name derives from an African martyr. It is a three aisled chapel enriched with a stunning fresco by Luca Giordano depicting the saint; a fresco on the apse vault representing the Deesis (Byzantine iconic representation of Christ in Majesty or Christ Pantocrator); multicoloured nineteenth-century mosaics portraying St Maria del Principio, by Lello da Orvieto; a medieval ivory parapet.

Do not miss the early-Christian Baptistery of St Giovanni in Fonte, the most ancient baptistery of the western world, dated back to 409 AD, with spectacular mosaics reminiscent of the most famous mosaics in Ravenna.

Haven't visited yet? Have questions about Via Duomo and the Cathedral of Assumption? Ask them here!

Rent a holiday home in Naples and travel like a local.