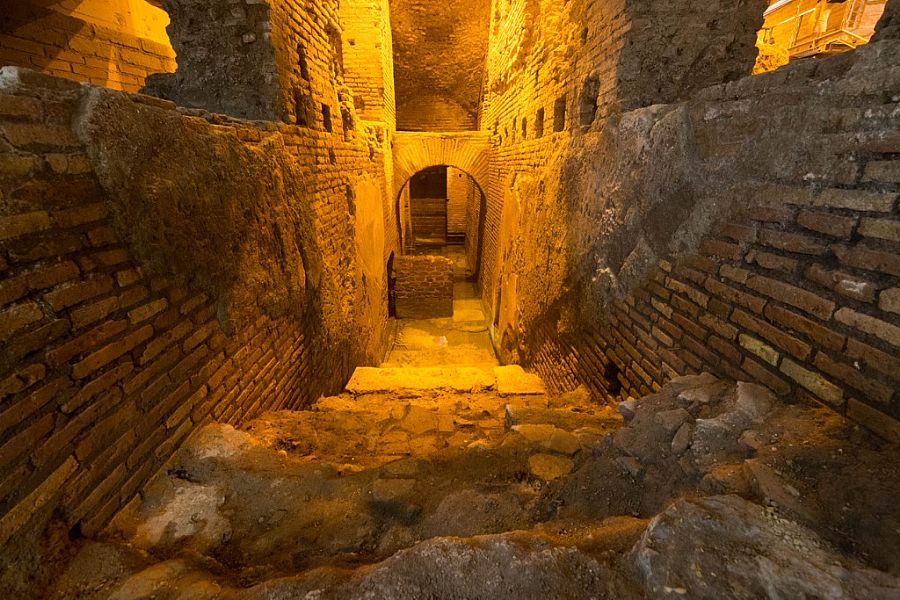 A fortuitous find occurred when workers unwittingly restored a cinema near the Trevi Fountain. They hit an underground world that is known as La Citta' dell'Acqua (city of water), though the subterranean archeological area is officially called Vicus Caprarius.

The tour takes you below the famous fountain to the "city of water" below it. Here you'll be guided through the ages of history, the buildings that had been houses and a luxurious "domus" residence, part of which was then transformed in later centuries of the Imperial Age into a massive water cistern. This was a sort of water distribution tank where the aqueduct Vergine ended. It is estimated that the cistern had a capacity of about 150,000 liters, which was then distributed throughout that district of Rome. The archeology area covers a surface area of about 350 square meters (about 3760 square feet) and goes down 9 meters (about 29 feet).

The remains are an underground world where you can see and touch the stata of Rome's history, and evidence of some of its epic events, like the famous fire of Nero and the assault by the Goths. It's a unique opportunity to see a part of Rome that few tourists find!

Get in touch with Trevi Fountain Underground to request more info

Your message has been sent to Trevi Fountain Underground.

Please note that requests are sent directly to Trevi Fountain Underground. It will be their responsibility to promptly answer and get back to you with further information.

Haven't visited yet? Have questions about Trevi Fountain Underground? Ask them here!