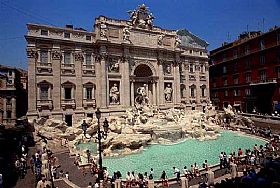 Fontana di Trevi is the most impressive and spectacular fountain in Rome. It is located where now there is the well-known Piazza di Trevi. Emperor Agrippa ordered to locate there one of the fountains of his aqueduct: three sets of pools leaned against the near building. Later on, around the VIII century, the aqueduct was affected by several changes and the main consequence was that a minor fountain – the Trevi one – became the aqueduct terminal called Acqua Vergine.

During the Middle Age, the Trevi water was under the Pope control, through his troops that were in charge of the control of the water, ensuring that no private citizen would have taken advantage of it. Moreover, the access to the fountain was protected by a gate in order to control and monitor the water collection by the population and the so-called "acquaroli": people trading water from the fountain and selling it door to door.

The three pools remained unchanged till 1453, when Niccolò V appointed Leon Battista Alberti to renovate the fountain: during these works the three pools became one, bigger and more capacious, but sill maintaining the three water sources. In the middle of the new design and prospect, just under the Papal coat and the two Roman signs, was placed a big inscription stating: "Nicolò V Pont. Max., after ensuring a number of rebuilding and repairing works in Roma, ordered the restoration – at his own expenses – of the crumbling fountain in 1453, seventh year of his pontificate".

The fountain is called Trevi because of a popular name "Trejo", meaning the thee streets ending up here; the crossroads is nowadays called Piazza dei Crociferi. Of the three water sources, the central one was made of a jar with thee lions around, pouring water in the below collecting pool. In 1562 Pope Pio IV decided to restore the old link between the original source and the aqueduct, therefore at the end of the works in 1570, in front of a large crowd of Romans,  the opening of the renewed fountain took place: this time the artist appointed for the repair was Giacomo Della Porta.

The nowadays fountain became to appear as it is today with Pope Urban III, who decided to replace it with a bigger one and committed the famous Bernini for all the works. The artist presented several projects, all very expensive, and for which the Pope increased the taxation upon the wine. This gave inspiration to a local poet – Pasquino – for some sonnets telling that in order to amuse the Romans with new water games, was grinding down the population, affection the price of the wine. This was not the only unbecoming act from the Vatican, in fact Pope Urban III allowed Bernini to destroy an ancient monument called "Capo di Bove" because of its beautiful marble in order to reuse the precious stone. This was actually the tomb of Cecilia Metella, but this time the Romans did not permit the whole plundering and allowed Bernini just to get part of the monument, which was not very little anyway. Either Urban III and Bernini died before the oeuvre was terminated: at that time the fountain was just a big pool, with another one located ahead.

A century later, Pope Clemente XII wanted to replace the fountain with another more monumental and, in order to achieve his desire, invited all the best artists of the time to present new projects for the fountain. Among all the drafts presented, the one made by Nicola Salvi was picked up, preserving the Bernini inspiration of the work.

The works, started in 1735, carried on during the entire Pope Benedetto XIV pontificate and finished with Pope Clemente XIII, who inaugurated the fountain on the 22nd of May 1762, even if Salvi, died before, was not able to finish the work of art, that was terminated by Giuseppe Pannini.

The fountain covers the whole minor side of Palazzo Poli: it is about 20 metres large and 26 metres high. You can admire a huge central cubby surrounded by a set of Corinthian columns supporting a big attic dominated by the Clemente XII coat and crowned by a balustrade with four statues representing the four seasons. This is what is stated just opposite the lintel : "CLEMENS XII PONT. MAX. / AQUAM VIRGINEM / COPIA ET SALUBRITATE COMMENDATAM / CULTU MAGNIFICO ORNAVIT / ANNO DOMINI MDCCXXXV PONT. VI".

Underneath the lintel there is a frieze reporting the epigraph which remembers the works carried out due to Benedetto XIV. From the inside of the central cubby is erected the overshadowing statue of Oceano upon a shell carriage shaped, dragged by two sea horses, one almost quiet whilst the other appears more agitated, symbolizing the two sides of the sea, all headed by tritons. The whole statuary group has been made by the sculptor Pietro Bracci who carried out this piece of art in 1762. at the sides of the central cubby, there are two side niches, in which are located two statues representing the abundance (Abbondanza) and the healthiness (Salubrità), surmounted by two low relief representing one the legend of Agrippa approving the fountain project and the other one representing the Roman virgin indicating the thirsty soldiers the water source.

On the frieze all along the three niches there is the epigraph remembering the Clemente XIII pontificate, under which the works were terminated. The fountain ends with the big sea cliff broadening out towards the building base and dipping into the huge pool representing the sea.

There are many tales and stories about this fountain, but among all, the most famous is certainly the one narrating that whoever throws a coin into the fountain will soon come back to Roma, but he has to throw it on his back.

A part from this, another interesting story is the one telling about the big pot placed on the right side of the fountain and so-called "Asso di coppe" - recalling the resemblance with the Italian play card – that was erected in that point by Salvi as we was sick of hearing the criticism of a barber and that’s why placed the big pot just in front of his shop.

Haven't visited yet? Have questions about Fontana di Trevi? Ask them here!