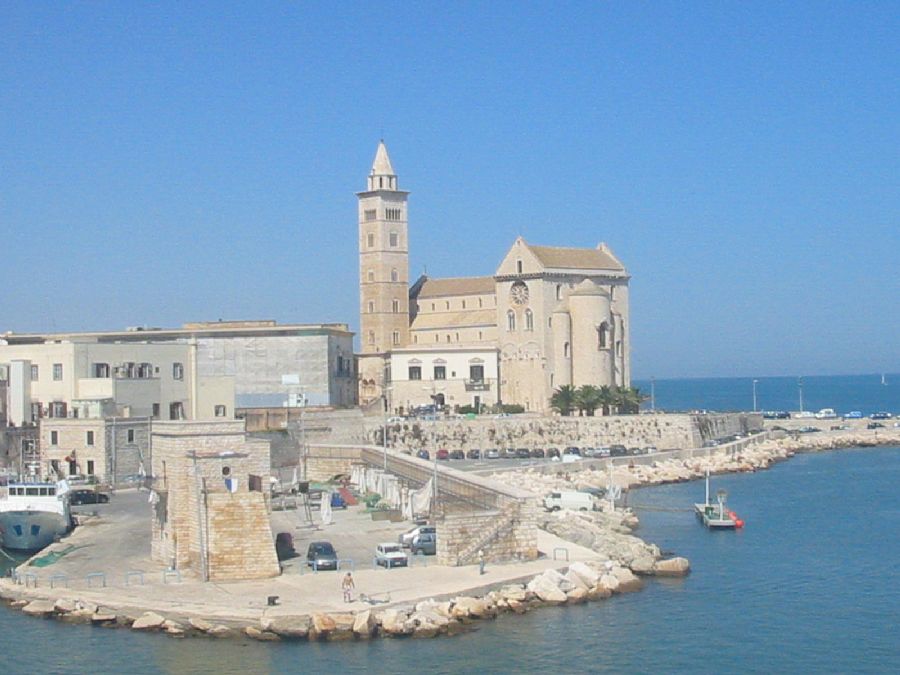 In the lovely seaside town of Trani, the cathedral stands out. The soaring structure with its tall bell tower sits right at the water's edge, making it the city's landmark from both land and sea.

The imposing structure actually contains two churches. It started as a small church in the Middle Ages called Santa Maria della Scala. Then a fateful day brought a Greek pilgrim to Trani, who was ill and immediately embraced and helped by the local population. The children had immediately been drawn to him, and in the few weeks that lived, is said to have performed many miracles among them before dying of his illness. There began a veneration among the area of this simple saintly man, and they began to build a church for adoration and to house his remains. He died in 1094 and work began on the cathedral in 1099. His remains where placed in the crypt in 1194. The distinctive bell tower, which is unusual in that it has an arched gateway as its foundation, was added later.

The lower church was the original chapel, and became the crypt. It is a lovely space with graceful arches, its columns decorated with Romanesque capitals. The upper basilica is a lofty stone space, unadorned in Romanesque sparity, the architecture itself the focus. The exterior is a lovely honey-colored stone with the Pugliese style of Romanesque, decorated with delicately carved portals and a rose window. The bronze doors were sculpted by a local artist, Barisano da Trani, in 1175. The exterior ones you see are replicas, with the originals inside to protect them. Around the back side of the church, the sculptural-looking apse is a lovely feature.

The church sits apart from the other buildings, making it a distinctive structure and a focal point. Not trip to Trani is complete without a pilgrimage to the church dedicated to St. Nicholas The Pilgrim!

Haven't visited yet? Have questions about Trani Cathedral? Ask them here!