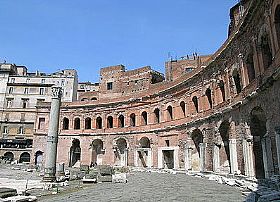 Trajan's Market is a complex of ruins located on the Via dei Fori Imperiali in Rome.

Trajan was the emperor of Rome from 98 to 117 AD succeeded to Nerva which ruled for 2 years after Domitiano, brother of Titus. Trajan was a general when was named emperor and was occupied in the wars against the Germans so that he had to wait nearly 2 years to be able to come to Rome to receive the title from the Senate. Trajan's election marked the beginning of a new golden age for Rome. He was a great military commander and, during his command, was able to expand the empire where no one had come before, not even Caesar and Augustus. He fought and won in Mesopotamia and Assyria arriving till the Indian Ocean and its intentions were to reach even further lands but had to give up just for the old age. Coming back from the eastern provinces he died in Selino and in Rome arrived just his ashes and were buried at the base of Trajan's Column, a masterpiece that commemorates the wars against the Dacians in the 101 and 107 AD. Beyond that Trajan was also an intelligent administrator inaugurating some important public works such as the Arena of Verona, a new port at Ostia, a new aqueduct, the Forum and what are now called the Markets of Trajan.

The Markets of Trajan were designed by Apollodorus, a brilliant architect who always followed Trajan in his adventures, at the beginning of the second century AD. During the Middle Ages the building was transformed with the addition of several floors still visible today and the building of some defensive elements such as the Tower of the Militia, built in 1200. Subsequently it was also built a convent, then demolished in the twentieth century to return to the city of Rome the Trajan's Markets as they used to be originally.

The entrance is in Via IV Novembre, and introduces the visitor in an area with a large number of shops on two floors where grain was distributed free to the poor in the ancient Rome.

The Markets of Trajan have always been a disputed place since the time of the barbarian invasions of the fifth century when the Vandals occupied them for several months. So did the Byzantine armies in Italy coming from the East to destroy the Ostrogoth kingdom during the next century.

Haven't visited yet? Have questions about Trajan's Market? Ask them here!