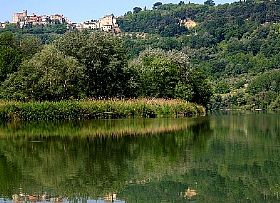 The Tiber-Farfa Nature Reserve is in northern Lazio in the countryside north of Rome. It was established in 1977 near the confluence of the Tiber and Farfa rivers after the national electric company constructed a hydroelectric dam. The resulting marshlands attracted a variety of both migratory and non-migratory birds and a host of flora. The lovely natural setting is a peaceful place to spend a day enjoying the great outdoors and the sound of the breeze mixing with bird calls.

There are woods and willows as well as rare species of ferns. The river is alive with trout, freshwater shrimp and croaky frogs, while the marsh is habitat for herons, ducks, cranes and falcons, along with other species. The park stretches across 300 hectares and has paths for walking and biking, as well as wood-constructed elevated walkways with periodic observation blinds. There is also a picnic area, so bring some goodies to enjoy during the visit.

The Tiber-Farfa Nature Reserve is located near Nazzano, which also hosts the Museo del Fiume (the River Museum), where there are botanical, zoological and paleontology exhibits on display. The pretty historic center of Nazzano has some restaurants and cafes and is charming for a stroll, too.

Haven't visited yet? Have questions about Tiber Farfa Natural Reserve? Ask them here!