The Etruscan painted tombs of Tarquinia 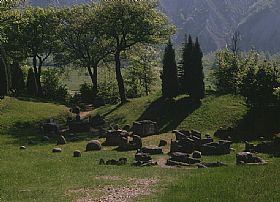 The Etruscan painted tombs of Tarquinia are located in the very heart of Tuscia, at about 45 Km north-west from the eternal Rome. This is one of major points of interest in terms of tangible Roman and Etruscan presence. Tarquinia is the natural birth place of one of the most important dynasties of Roman emperors, known as Tarquinii, with two emblematic personages like Tarquinius Priscus and Tarquinius Superbus.

The ancient city of Tarquinia (TarXna in Etruscan) stood on the La Civita hill, close to the modern city. Very little remains of the urban fabric of the city: the remains of the solid walls of the fourth century BC, made of square blocks of limestone and about five miles long, and the remains of a temple of the first half of the fourth century BC known as Ara Reginae, incredibly rich in terracottas, some of them preserved into the Museo Nazionale di Tarquinia. The importance of Tarquinia is shown by the legend according to which the city was founded by Tarchon, companion of Tyrrhenus, mythical hero known to be the ancestor of the Etruscans.

As time goes by, Tarquinia became so big to be compared to the ancient Athens, after the victory against the Persians. It used to be beautiful, coloured and pervaded with richness, civility and culture. In the VII century a wealthy man left the big, opulent and lively Tarquinia to spread out his ability to colonize and civilize. His name was Luchmon and became the fifth King of Rome with the name of Tarquinius Priscus. He transformed the group of prehistoric huts scattered on the Seven Hills, along the marshy River Tiber, into the unmistakable Roman urban plan.

The work started by Tarquinius Priscus was continued by two other Etruscan kings, Servius Tullius and Tarquinius Superbus. Rome became quite soon a huge war machine, so that the Etruscans and Tarquinia - mother of losers and winners – were the first to be crushed.

As reflection of the ancient splendour you can still admire the wall colourful paintings inside the necropolis. The blues, olive-greens, reds and blacks are so bright to look painted just yesterday.

The visitor suddenly goes back, as if by magic, into the heart of the big Etruscan families, hunting lodges, inside the houses and takes part to their ceremonies and parties, among dancers, musicians and well-dressed table-companions.

The Monterozzi Necropolis (listed as UNESCO world heritage site) is a must see, indeed! It is a large open-air museum based around the various ancient tombs, houses and temples that are still being unearthed. The site's main attraction is its series of 150 Etruscan tombs, 15 of which are open to the public. These tombs are fames for their frescoes, depicting various pastoral, spiritual and sexual scenes. The most famous of these is probably the Fishing and Fowling tomb. Small huts mark the apparent entrance to this necropolis; there is no discernible layout or suggestion of a substantial township on the site.

Haven't visited yet? Have questions about The Etruscan painted tombs of Tarquinia? Ask them here!