The Carnival of Venice 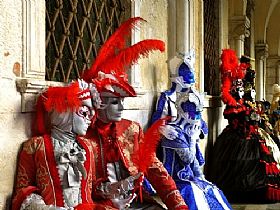 Most Italian cities celebrate carnevale in one way or another, but Venice holds the title for the most renowned celebration. The Most Serene Republic was the epicenter of opulence and entertainment, reflected in its over-the-top parties for carnevale. In centuries past, Venice's Carnevale was a a months' long event of decadence with public and private parties, fireworks, street entertainment, dancing and gambling. This helped to create the image of Venice as a fun loving city with all-night festas, grand feasts, and an "anything goes" reputation (Las Vegas could only wish to entertain like Venice did in its heyday!)

Started in 1162 in honor of a victory by the republic, it became more refined in the Renaissance and more popular and elaborate in the ensuing centuries, so that by the 1700s it sheer refined debauchery that drew pleasure-seekers from all over Europe. Completed cloaked and masked, people could gallavant, imbibe, gamble and philander as they pleased, without anyone knowing their identity. Class distinctions melted away under the masks and parties. Casanova is a good example; Venice's famous playboy and infamous womanizer, whose name is still legendary. He was able to seduce, deceive, ingratiate himself, finagle dealings and work all the angles because of the ability to easily hide behind different masks.

When the Republic of Venice fell to Napoleon in 1797, Carnevale was outlawed. It was slowly revived in the late 1800s, only to be suppressed again by the Fascists in the 1930s. It was reinstated officially by the city in 1979, and has enjoyed a spectacular resurgence of popularity, drawing crowds from around the world looking for a taste of the historic, refined, and indulgent event. What used to last months in its prime, now takes place over a 12-day period. Masks are still important to the festivities, so be sure to choose a hand-crafted piece from one of the skilled mask-makers, who still practice their art in Venice. (PLEASE don't buy an imported imitation; it undermines the historic craft and cheapens the event! They might cost more, but remember they're hand-made and buying one supports a centuries-old tradition! It will be a wonderful keepsake to take home.)

The Pre-Lenten festivities culminate on Fat Tuesday, but there are events throughout the period. Don't miss the Volo dell'Angelo, the "flight of the angel" (also called Volo della Colombina, the dove) which transports a costumed celebrity from the top of the tower of San Marco down to the middle of the piazza by zipline. The Danza delle Ore is a highlight, too, a pyrotechnical musical extravaganza with highly choreographed dance show sprinkled with a lavish burst of fireworks, accompanied by costumed parades. There are banquets, parties and other festivities that you can participate in, with tickets available for many of them online, on the city's site dedicated to the Carnevale.

Get a glimpse of Carnevales past at the Ca' Rezzonico Museum, which has displays of costumes and masks. Or read the historical novel, The Venetian Mask, by Rosalind Laker for a glimpse of the period and the tradition of mask-making.

Haven't visited yet? Have questions about The Carnival of Venice? Ask them here!

Have a look at our apartment rentals in Venice and Veneto.