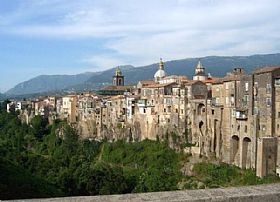 The first sight of Sant'Agata de' Goti makes a magical impression. The picturesque medieval town is perched on a sheer bluff high above a river gorge. Crossing the bridge to the other side of the cliff is like leaving the modern world for the old one.

While it's just a few miles from Caserta and its magnificent royal palace, Sant'Agata is a world away. It has several millennia of history, dating back to the ancient Samnite city of Saticula. It was taken over by the Romans, then dominated by the Goths (who lent it the name), the Longobards, and then became part of the Duchy of Benevento. It still lives in the Middle Ages, as the historic center is a well-preserved warren of narrow lanes leading to tiny piazzas, with pretty shops and palaces in between.

Sant'Agata de' Goti is a real gem, a relatively unknown yet captivating town. It is in the Benevento province, on the edge of Campania's most famous wine country, the Sannio. Here you'll find fabulous Falanghina and Aglianico, vintages becoming famous world wide. There are shops, eateries and views to enjoy along with the camaraderie of the townsfolks, who enjoy sharing their heritage with visitors.

The Church of the Annunziata was built in 1238; its adapted Romanesque interior fronts a Gothic interior that has fabulous frescoes hidden within. The Castello Ducale, the protective fortress that was built by the Londobards then added onto by the Normans, dates back to the 1100s, and has mythological frescoes in it. The town carpets the streets with flower petals (literally!) every June for Corpus Domini with its incredibly beautiful Infiorata, where intricate "paintings" are done on the streets using flowers, seeds, and leaves. There is a type of Palio event held annually, too - the Giostra del Cavaliere Turchino is a jousting match that pits the town's neighborhoods against each other in a high-spirited competition.

The Castle, of Norman origins even if notably renovated during the XVII century, has a marvellous hall with mythological frescoes.

The Churches of Annunziata, St Menna and St Francesco.

Try the local olive oil, wine and fruit (specially apples and cherries). You should not miss the famous "mela annurca", typical kind of apple that has gained in 2006 the IGP mark. The fruit, small and flattened, is recognizable for the unmatchable organoleptic properties: compact white pulp, acidulous and incredibly sweet-smelling. The mela annurca was already known and much appreciated in the Roman Age, it was mentioned indeed by Pliny the Elder. Pliny localized the apple's origins in Pozzuoli, but nowadays the mela annurca is cultivated everywhere in the Campania region.

Haven't visited yet? Have questions about Sant'Agata de' Goti? Ask them here!

Have a look at our apartment rentals in Campania. 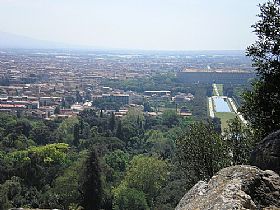 The city of Caserta is synonymous with the royal palace that is situated there, an opulent estate that matched the splendor of Versailles. 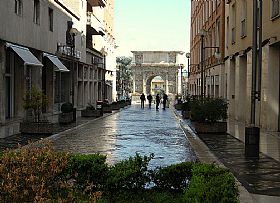 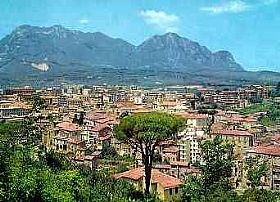